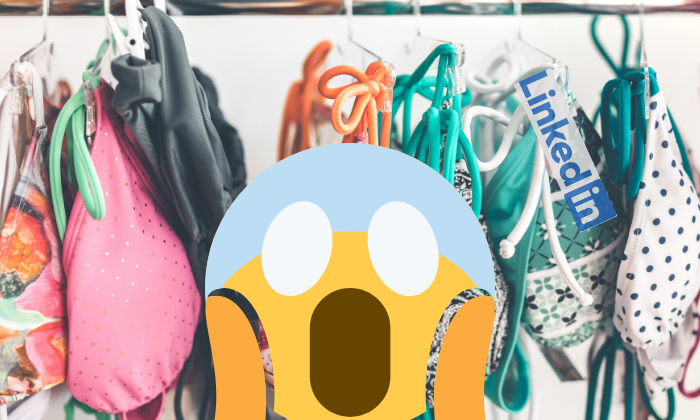 Boss Betty contributor Amanda Hirsch helps women and the organizations that support them get clear on what they want to say and how best to say it through her company, Mighty Forces. Clients include Melinda Gates’ Pivotal Ventures and Sundance board chair Pat Mitchell.

“LinkedIn is the swimsuit shopping of building your personal brand,” said Caryn*, a friend and client, over a videoconference. She had just hired me to help her tell the story of her career more powerfully and was reflecting on the resistance she felt around LinkedIn in particular.

I’ve repeated her line to many clients since then; their eyes widen, maybe they chuckle, and they say, “YES. That’s IT.” Updating LinkedIn feels onerous. Many women also struggle with fear of doing it wrong, of not knowing what to say and then saying it poorly. It’s not LinkedIn’s fault. It’s not even about LinkedIn. It’s that most women are simply uncomfortable talking about their accomplishments.

Being seen as bragging, it seems — and this is anecdotal — is as threatening to women as water is to the Wicked Witch of the West. I see this in my work with women leaders across industries and age groups, from media and medicine to life coaching, from 20-somethings to 70-somethings. Extroverts, introverts, people who are behind the scenes and people who are out in front — it doesn’t matter. The aversion is (nearly) the same.

At the same time, according to our research, most women (83 percent) find it inspiring to hear about other women’s accomplishments. My partners in this research and I — all women business owners — call this discrepancy between wanting to hear about what other women have done, but not wanting to talk about ourselves, the “self-promotion gap.”

And it has to close.

Change the mindset to storytelling versus reciting a laundry list of accomplishments. Forty-two percent of women would rather clean the bathroom than talk about themselves in front of a room full of strangers, according to our research. About 47 percent would rather run errands in the rain. In the rain.

I wonder how the data might have shifted if we’d asked women how they felt about sharing their stories, specifically. The idea of sharing your accomplishments may call to mind listing your credentials, reciting job titles and regurgitating business speak for what you did at each of those jobs. Of course no one wants to do that; I feel bored just typing it. But most of us enjoy sitting through stories.

Our brains are wired for story, which is why we’ve been telling them for millennia. Stories create belonging; when we see ourselves in them, we step inside and feel a deep sense of connection. So if we shift the way we think about talking about our careers towards the idea of sharing a story, I wonder if that makes it feel more accessible.

As our research shows, there is altruistic value to self-promotion. I hope that fact alone inspires more women to start talking about their careers (and lives, while we’re at it) in bigger ways — after all, as women, it often

feels easier to help other people than it does to help ourselves. “If you can see it, you can be it,” the old adage goes, describing the importance of role models to lifting up traditionally disenfranchised groups. A little girl meets a female CEO, for example, and believes she can be a CEO, too.

But getting more women to talk about their achievements isn’t just about sisterhood, or creating role models for each other on the path to growing women’s power. It’s about that, yes, but it’s also about declaring what you’re up to in the world, in order to attract meaningful opportunities.

Don’t compromise on your story. When you tell the story of your work — not just your job title, but what the work you do means to you, what it stands for—you become magnetic. It’s not about telling people what you think they want to hear; it’s about telling people what you want them to know. After years of working in strategic communication, I’ve come to see how tailoring messages about ourselves for our audiences too often leads to compromising the truth and power of what we actually want to say. By contrast, when we craft an authentic story about ourselves, one that rings true in our bones, and then when we share that story on- and off-line, we step into our power, big time.  We attract:

I hope we can get to a point where women share what they’ve accomplished because it’s part of sharing themselves, of taking up space in the world, and that they can do this unabashedly, without apology, or guilt.

Learn from others. For anyone who remains unconvinced, I’d like to share some examples of the magnetic effect of telling your story from my work with women leaders.

The first time Angela published an article to LinkedIn, the organizer of a major conference in her industry reached out in the comments and invited her to keynote his event. It wasn’t just any article. It was one that amplified the core story she wanted to tell about herself — that of a technology executive who helped people bring their best selves to work. She declared this story in her LinkedIn headline; bolstered it in her LinkedIn summary, or bio; and amplified it with an article that made the idea of “bringing your best self to work” — and its business implications — crystal clear. The head of the conference read the article and wanted to hear more.

Sharon, the head of workplace experience for a global company, noticed that vendors had been bidding to work with her with renewed vigor. It turned out that they’d read the articles she’d been writing on LinkedIn, in which she laid out her vision for creating meaningful experiences that help people live and work better. Later, when she posted an opening on her team, she found herself flooded with applications. This was common at the well-known company where she worked, only this time, the quality of the applications had shifted; they didn’t just want to work for the company, they wanted to work for her, in service of her vision.

Elena is a physician and podcaster. She’s on a mission to humanize medicine through a mix of education and storytelling; in the past, you wouldn’t have known it, though, by Googling her or looking at her LinkedIn profile. You would have seen that she works for a company that produces medical education podcasts. That she is also a clinician. That she went to med school. But these would be puzzle pieces and wouldn’t form a coherent impression in your mind. The purpose fueling her work was missing. Now, her LinkedIn profile tells her story. It gives you a taste of what it feels like to be in a room with her. Now, when we look at her profile, we understand who she is.

Finally, remember Caryn? Who compared updating LinkedIn to swimsuit shopping? As soon as she updated her LinkedIn profile with the story we’d crafted for her, high-level people in her industry began reaching out to connect. She also noticed that when new people started at her company, they seemed to immediately understand her role in a way they never had before. Caryn was completely energized and couldn’t believe she’d resisted updating her profile for so long.

These are just a few examples of how getting clear on the story you want to tell about what you’re up to professionally, updating LinkedIn to reflect that story and creating content that amplifies your story and gets it into people’s feeds can open doors and create opportunities. Some people might call this “building a personal brand,” but I reject that language: Companies and products have brands. People have stories.

Also, learn how to swim. Here’s the thing: You’re always telling a story and leaving an impression through your words and actions. The question is whether you want to take the reins as narrator, or let other people try to piece together your story for themselves based on scattered or halfhearted clues.

With her clients and colleagues, Mira was a leader, not only in title, but also in presence and personality. She was always driving her team toward creating a higher quality product and a smarter way of working, all in service of changing the experience of giving and receiving healthcare in this country. But when I looked at her LinkedIn profile, all I saw were a bunch of bullet points regurgitating business jargon. She never shared anything about her team’s work, or the vision it was in service of. Online, her presence was limp, and small. Her vision, energy and drive were absent in a place where it would have the potential not only to attract juicy opportunities her way, but also, to galvanize people all over the globe.

Don’t be like Mira. If updating LinkedIn feels like swimsuit shopping, think of this: If you don’t have a swimsuit, you can’t swim.

Editor’s note: Names were changed to protect the identity of job-seekers.