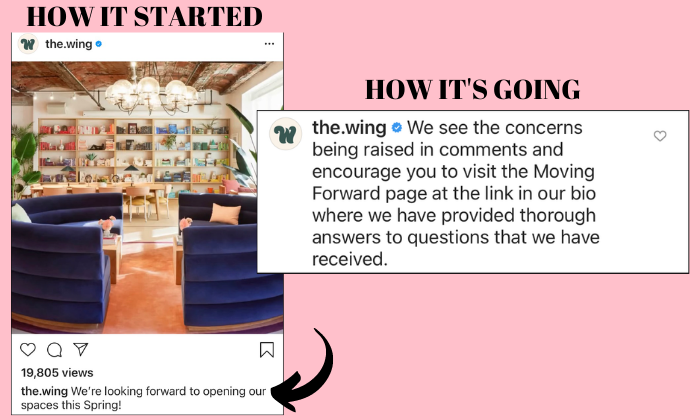 The Wing posted on Instagram Wednesday that they would be reopening next week, starting with one of their Manhattan locations. Amid the heart emojis in the comments, the long-standing accusations of a toxic work environment at the women’s coworking and networking club began to pile up. Around five hours after the post touting their imminent return, the company added a note saying, “We see the concerns being raised” and directing people to a page titled “Moving Forward” for answers to their questions.

The blowback against The Wing, which purports to be a bastion of inclusivity for all women and nonbinary people, began to surface in March of last year. Allegations of a racist and discriminatory workplace emerged, and, by June, the organization’s once-revered co-founder and CEO, Audrey Gelman, had stepped down as a result. In the months since, The Wing has tried to rehabilitate its reputation even as it laid off the majority of its staff and closed its 12 locations during the pandemic.

A series of commenters on Wednesday, including a collective of former staffers called Flew the Coup, demanded that The Wing take responsibility for the harm they say the company inflicted on its workers, particularly its Black and brown employees. “As a former member I can not imagine showing an ounce of excitement for the return of an organization that caused so much pain and continues to ignore valid requests for recognition and reparation,” one comment read.

The Flew the Coup group, which has amassed thousands of followers on Instagram, has demanded an apology from The Wing co-founder Lauren Kassan, who was just named CEO this March and who they say is complicit in creating a toxic work culture. The ex-employees collective also asked that former staff be released from their non-disclosure agreements (The Wing characterizes these as standard mutual non-disparagement clauses) and that the company help fund grants providing relief to its laid-off workers. “You’re moving forward without repairing the damage to the employees you harmed,” reads one post from the group.

The Wing’s “Moving Forward” web page, to which it directed its detractors on Wednesday, said that the organization has “taken essential steps to accelerate our efforts to support a diverse, inclusive and equitable culture at The Wing.” Among them, the company said, was bringing on the former CEO of Care.com, Sheila Lirio Marcelo, as its new executive chair and appointing an advisory board to help with diversity, equity and inclusion efforts. The company also detailed the severance packages that were given to laid off employees.

While Flew the Coup said on social media that The Wing has not responded to their requests, Gelman, who is no longer a part of The Wing, addressed the group directly back in October, Fortune reported, writing that she wanted to “acknowledge the bravery and candor of former employees of The Wing who have shared their experiences” and admitting that “we began to uphold the kind of societal inequality we set out to upend.”

Neither The Wing nor Flew the Coup responded to requests for direct comment as of publication.