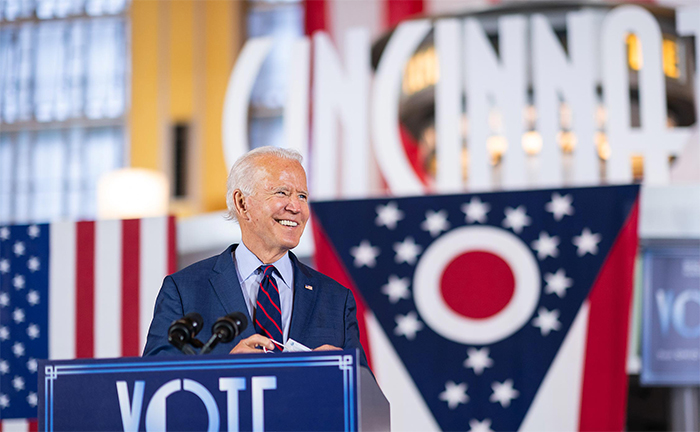 By Chabeli Carrazana, Shefali Luthra, Originally published by The 19th — In a sweeping $1.9 trillion plan, President-elect Joe Biden is expected to lay out his legislative “Rescue” package Thursday evening. If enacted, it will provide wide-ranging relief to the millions of women workers who have been economically impacted by the pandemic.

The plan is the first part of a two-step package that will focus on addressing the intertwined economic and health crises, senior Biden administration officials said Thursday. The second step, to be announced in coming weeks, will center on recovery.

Many of the plan’s pillars will center on issues that have affected women disproportionately: child care, school reopenings, hunger, evictions, paid sick leave and the minimum wage. For instance, Biden is calling for raising the federal minimum wage from $7.35 to $15 an hour, a policy that could lift 1.3 million people — most of them women — from poverty. Among the proposals is aid for programs that help women and children, as well as programs that serving survivors of domestic abuse, addressing the “shadow pandemic” of sexual assault and gender-based violence.

“It’s clear what we are inheriting from the Trump administration is much worse than we could have imagined,” one senior Biden administration official said on a call with reporters. “More than 10 months later, they still don’t have the basics down — not enough tests, frontline workers are in fact still reusing N95 masks and other PPE … states are scrambling, there was really no plan to get needles in arms. And there’s been very little coordination. So we’re going to do just the opposite. This is a whole-of-government effort.”

The plan’s three key aspects are to mount a national vaccination program particularly focused on getting vaccines to underserved communities and reopening schools; send $1,400 checks to households, in addition to the $600 checks sent in December; and provide support to workers and businesses most directly affected by the pandemic.

This legislative agenda will be presented to a Congress that has a slim Democratic majority in the House and a 50-50 split in the Senate, with Vice President-elect Kamala Harris serving as the tie-breaking vote. Most pieces of legislation will still likely need 60 votes to clear procedural hurdles in the 100-member Senate.

Biden administration officials said many elements of the plan came from their conversations with members of Congress.

“We’ve done a lot of consultation with members of Congress, and we have spent a lot of time speaking to and listening to governors and mayors,” one official said. “We think there is a broad understanding of the urgency of the moment, of the immediacy of the crisis and the need to act.”

The vaccination plan and reopening schools

Biden has proposed a $20 billion program that will create community vaccination centers and deploy mobile vaccination units to reach underserved populations, including people who are undocumented.

That approach fits with what public health experts have called for, noting that many vaccination centers — whether hospitals or pharmacies — aren’t accessible, especially for women frontline workers who may not have adequate transportation, time off or child care to travel miles for a vaccine.

Another $50 billion will go toward expanding testing, with funding for more rapid tests and more robust testing protocols at schools and within local governments.

The vaccine rollout has lagged so far, with states and public health departments — who are tasked with administering and coordinating the national vaccination campaign — saying they need more money and people.

The Trump administration has responded by expanding which Americans are eligible for vaccines, but hasn’t addressed concerns about whether state and local governments have adequate resources or funding.

So far, about 37 percent of all the distributed vaccines have been administered, per data compiled by Bloomberg News.

Biden also hopes to nearly triple the public health workforce by funding an additional 100,000 jobs, which would involve vaccine outreach and contact tracing — also critical areas, especially as experts worry that vaccine skepticism and misinformation could deter women from getting the injections.

Already, women make up about 75 percent of the full-time health care workforce in the United States. Latinas and Black women are overrepresented in the long-term care labor force, in particular, which is caring for people who are older and have disabilities, the most vulnerable population to COVID-19.

“Let’s make sure our caregivers — mostly women, women of color, immigrants — have the same pay and dignity they deserve,” Biden added during his address.

Vaccinations and more testing will be needed to reopen schools quickly, the Biden team said. To that end, the plan allocated $130 billion to school reopenings and other policies that will make reopening safer, including reducing class sizes, modifying classrooms for social distancing, providing more protective equipment, enhancing school access to nurses and providing more technological infrastructure for students to address inequalities.

To address the first recession in the nation’s history that has affected women more than men, Biden’s plan hopes to tackle the child care crisis that has sidelined working mothers across the country, leading to historically high unemployment rates that peaked above 15 percent early in the pandemic.

The incoming administration wants to provide $25 billion in emergency funds to help stabilize the industry, helping daycare providers pay rent, utilities and payroll, plus assistance to help fulfill coronavirus guidelines around social distancing and protective equipment. Those funds would be in addition to the $10 billion Congress allocated in December.

Biden also wants to increase the child tax credit beyond the expansions that took place under the Trump administration, up to as much as $4,000 from $2,000. The plan proposes making the credit fully refundable, so low-income families who have particularly struggled to access child care this year can get the funds quicker.

The pandemic relief CARES Act that passed in March instituted a national emergency leave policy with the hope of keeping sick workers out of the workplace and limiting the spread of the virus. But many of those provisions, which aided some 80 million workers nationwide, expired at the end of last year.

Biden’s plan would reinstate and expand the paid leave policy first put forth early last year. Paid sick leave, which allows workers to take time off work for health reasons, but also to care for children or a family member, is most absent in the low-wage jobs that women dominate. They were the most likely benefactors of the national policy as the largest swath of essential workers.

Biden is asking Congress to reenact the policy through September 30, but without the exemptions carved out in the CARES Act that omitted the requirement for employers with more than 500 employees or less than 50 employees. Instead, the proposal would offer 14 weeks of paid sick, family and medical leave, including for workers who are caring for children after a daycare center closed.

Last year, about 700,000 parents — two thirds of them working mothers — left the labor force because they needed to care for a child.

The leave would be 100 percent refundable to employers with less than 500 employees.

Black women have borne an outsized share of the economic hardship of the pandemic recession, particularly in housing, where they are the most likely group to face eviction — even with national moratoriums in place.

The December stimulus package passed by Congress extended the existing national moratorium on evictions to the end of this month, but Biden’s plan would extend it to the end of September.

A key part of addressing the housing crisis, experts argue, is addressing the months of unpaid rent that is going to come due once moratoriums are lifted. About one in five renters and one in 10 homeowners are behind on payments.

Part of that rental relief will come in the form of stimulus payments.The president-elect wants Congress to pass $400-a-week federal unemployment insurance to workers as well, expanding on the $300-a-week insurance included in the December stimulus that expires in mid-March.

And, in addition to $25 billion in the most recent package allocated for rental assistance, the Biden administration is proposing an additional $30 billion aimed at helping hard-hit workers pay rent, water and energy bills. Another $5 billion would go to finding housing for those experiencing homelessness.

The national hunger crisis — a consequence of the pandemic-induced economic downturn — has disproportionately devastated women, and particularly mothers. More than a quarter of all mothers have reported struggling to feed their children, and data crunched in early November revealed that more than one in 10 women with children younger than age 5 had struggled to feed their toddlers.

A robust body of research shows that when families do not have enough to eat, women are the first to go without food.

The December stimulus bill provided some relief, by increasing benefits for SNAP — the Supplemental Nutrition Assistance Program — by 15 percent for six months. Experts hailed that change, which research suggests is one of the most effective ways to address hunger. But many worried it wasn’t enough, especially with the six-month drop-off.

Biden’s package would extend the SNAP increase through September 2021. The package also commits to backing a 15 percent SNAP increase — roughly $25 per person per household, each month —  as long as the pandemic persists.

Beyond SNAP, Biden’s plan would put another $3 billion into the Special Supplemental Nutrition Program for Women, Infants, and Children, also known as WIC, and provide an additional $1 billion benefit to address food insecurity in Puerto Rico, American Samoa and the Northern Mariana Islands.

5 things everyone should know about Betty Friedan, the ‘mother of modern feminism’

The trailblazing feminist Betty Friedan would have been 100 this week. The likes of Gloria Steinem, Black Lives Matter co-founder Alicia...

Roz Brewer is set to become the CEO of Walgreens, the country’s biggest pharmaceutical chain. When she officially assumes the...

Bumble CEO Whitney Wolfe Herd is set to join the teeny-tiny percentage of female founders in history —  around 20...

Biden to announce his $1.9 trillion economic plan — much of it will help women

In a sweeping $1.9 trillion plan, President-elect Joe Biden is expected to lay out his legislative “Rescue” package Thursday evening....

Job in a nutshell: As president and COO of Elon Musk’s space exploration company, SpaceX, Shotwell oversees the day-to-day operations...

A tale of two tech titans, an industry rife with bias and the Black women bearing the brunt of the burden

Timnit Gebru, the now former co-leader of Google’s Ethical A.I. team, tweeted that she was fired this week in retaliation for an...