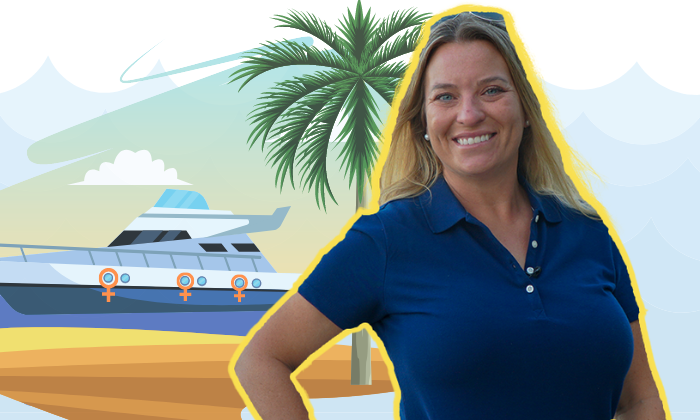 Captain Kelly J. Gordon, 39, is the captain of Freddy, a 106-foot luxury yacht based in South Florida and The Bahamas.

I had no intention, whatsoever, of becoming a yacht captain. It was a complete accident. I saw an interesting and unique opportunity and jumped on it. I was working as a chemistry professor at a community college in North Carolina in 2009 when a student invited me to a party on an 80-foot yacht. Immediately, I was hooked. I knew I could drive that thing. Little did I know, I was about to embark on a career path in which I became “one of the few” — one of the few women, that is.

Very early on I realized how unusual it was for a woman to be a captain. I was surrounded by men on the vessel from the start. I cringe now looking back on it, but, at the time, it almost seemed like being a captain — especially of a yacht — was a “man’s job.” I had always thought, along with so many others, that men and women had inherent aptitudes for different types of careers and lifestyles over others and that being a boat captain was one of those jobs that might be a more natural fit for men. 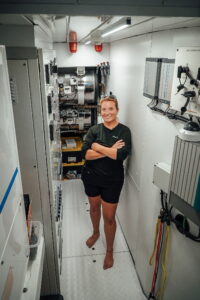 At some point along the way, I came to the realization that there’s nothing inherent about it — it’s learned behavior based on outdated and wrongheaded social norms. I’m a good case in point: I grew up on a farm so I’m mechanically inclined and totally at ease with handling heavy equipment. Farming is also male-dominated but, because that’s the world I knew growing up, that’s where my aptitude and inclination developed — it has nothing to do with gender.

Sexism is a fact of the industry. Everyone — whether clients or crew members — automatically assumes that I work on the interior of the vessel, serving up food and drinks or keeping the interior impeccably detailed, roles largely held by women to this day. If I’m standing shoulder-to-shoulder with one of the men on the boat, folks automatically shift their eyes and body towards him and speak to him as if he is the captain.  I often laugh it off but sometimes I can’t help but get a little frustrated — I’ve worked hard to get where I am.

The fact that I have to prove myself 10 times over in many of the same situations that would be expected of a male captain is just a given. Interestingly, many of my male counterparts have acknowledged this fact as well. Oftentimes, people will stand and watch me maneuver the boat, skeptical of my abilities. I ask myself, “Would they be watching as intently if I was a man?”  That puts a bit more pressure on me, but it’s also made me particularly good at focusing on the task at hand, which often, luckily, results in me not noticing these instances. It happens with the engineering side of things, too. I was talking to a mechanic the other day and his eyes got big and he said, “Wow, you know what you’re talking about.!” Um, yeah, I’m the captain.

I will say, though, that many men in the industry have also been the biggest supporters of my goals. I couldn’t have gotten this far without them and their continued support and encouragement. I work tremendously hard at my work relationships and I think that is noticed.  I let people know that I value and appreciate them. I do think that 99 percent of the men (and the few women) in this industry would move mountains for me, and I would do the absolute same for them.

To be honest, I find that I largely just try and ignore the sexism I encounter. I really think that what’s important is that you not let it bother you, and, if possible, let it fuel your desire for success. But I know that if I want to inspire a change to what seems to be the norm in this industry, it’s important to share these stories.

A successful businessman in the industry once told me, “If you don’t tell your story nobody will.” I’ve recently realized that the voice that I have as a woman in this industry just might inspire other young women who might be intimidated by male-dominated sectors to chase their dreams.  And if I can make a difference to even just one woman, I am that much closer to fulfilling my duty as a human being.