Job in a nutshell: Technically, Jill Hazelbaker is VP of Marketing & Public Affairs but seems to have her hands around virtually everything at Uber, which has no COO. Her on-paper responsibilities span communications, marketing and policy. Read The Information‘s deep dive on the executive here. 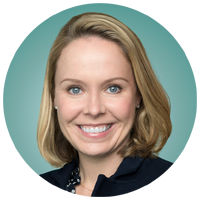 Quote from a notable: Uber CEO Dara Khosrowshahi: “There may be execs who take the pulse of the room before speaking up. Jill takes her own pulse and then speaks up,” Khosrowshahi told The Information. “The vast majority of the time she is right.” This seems like a particularly good quality for a top female exec at a company with an infamously brotastic past.

Recent career win: Regardless of what side you fall on in the debate over whether Uber drivers should be classified as employees rather than gig workers, one would be hard pressed to find a person that did not think Hazelbaker navigated Uber’s legislative victory diplomatically and with finesse.

Getting personal: Hazelbaker was raised in Oregon, where her dad owned a tire shop. She attended the University of Oregon (go Ducks!) where she got her B.S. in political science. She’s a Republican and worked on various state campaigns in Oregon before joining McCain’s presidential bid. She has two children, one still a toddler. Her annual compensation package is second only to that of Uber CEO Khosrowshahi.