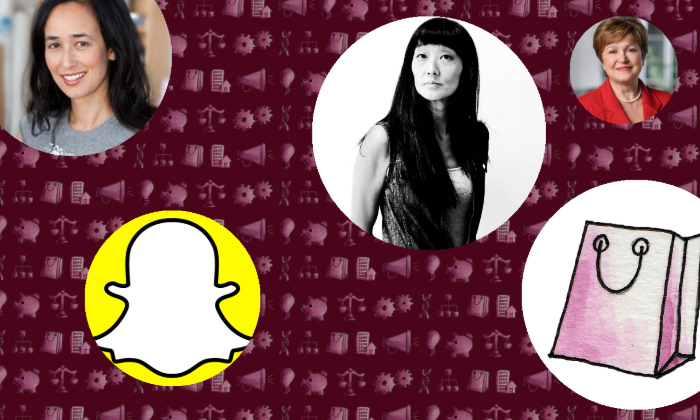 General Assembly: Is the “glass ceiling” metaphor passé? [NYT] The so-called “bathroom bill” in North Carolina was settled, and transgender people can finally choose the public restroom consistent with their gender identity in state-run properties. [Reuters]

Here’s the BB breakdown of Tuesday’s biggest female-focused news by industry. Have news to share? Email us at tips@bossbetty.com.

Advertising & Media: In this week’s round-up of agency moves per AdAge, Deutsch Los Angeles made Doris Chung EVP and executive creative director, putting her in charge of creative for Mattel and H&R Block among other major accounts; Johannes Leonardo made three new creative hires including Alice Blastorah, who was previously at Saatchi & Saatchi Los Angeles; and WPP’s Garage Team Mazda brought aboard Joanna Young, formerly of Team One, as chief strategy officer. [AdAge] Bustle Digital Group, which focuses primarily on content for women (though it’s led by male CEO Bryan Goldberg), acquired science site Inverse. [AdWeek] Veteran journalist Jodi Rudoren will be the new editor in chief of The Forward. [NYT]

Energy: Executives at solar companies are mostly white and male, as women in the industry can attest to and as documented in this recent study — now, one person is on a mission to bring discussions about solar power, and jobs in the sector, to minority communities. [NPR] Duke Energy awarded four South Carolina schools grants to drive diversity in the energy workforce. [Charlotte Business Journal]

Finance: There are a few women on the list of possible successors to Christine Lagarde at the IMF, including World Bank Chief Executive Kristalina Georgieva and Spanish Finance Minister Nadia Calviño. [CNBC] The tangled web of accused sex-trafficker Jeffrey Epstein is particularly tangled up with Deutsche Bank. [WSJ] Conservative scholar and former Trump advisor Judy Shelton — who wrote in an essay earlier this year that “we make America great again by making America’s money great again” — is a leading candidate for the Federal Reserve Board, and one that could substantially alter economic policy. [Washington Post]

Law: Dorsey & Whitney have implemented “diversity hours,” which lets lawyers count time spent on diversity training towards their billable hours requirements. [American Lawyer] While major tech firms are working towards requiring a more inclusive approach from the outside law firms they engage, they need to do a lot more on that particular front, concluded a panel hosted by the National Bar Association and Airbnb. [Corporate Counsel] State supreme courts are growing less diverse. [Big Law Business] Penn Law Professor Amy Wax will not be stepping down in the wake of reportedly racist remarks she made at a conservative political conference. [Big Law Business]

Science & Healthcare: The gender pay gap in Europe’s life sciences sector is greater than in North America or Asia, especially in research and development positions. [Yahoo]

Tech & Engineering: Snap beat out the street’s expectations for revenue and user growth, thanks in part to a popular gender-changing lens. [Reuters] Read about the five women who made the moon landing possible. [NYT]