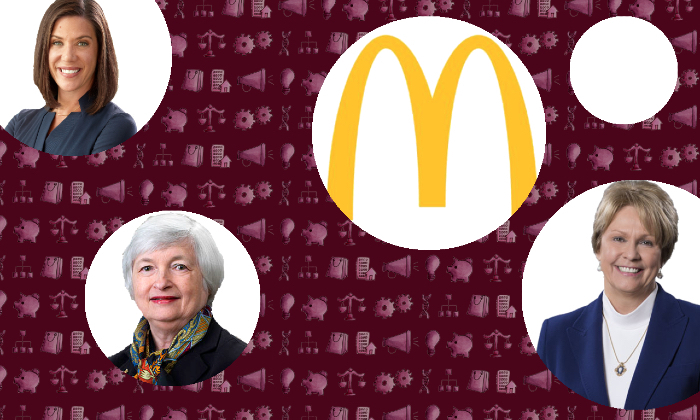 GENERAL ASSEMBLY: Fortune‘s Global 500 is out, and (take a deep, deep breath) women hold only 2.8 percent of CEO roles at the world’s top companies. Hard to stomach, but do check out the Boss Betties who made the list. [Fortune]

Here’s the BB breakdown of Monday’s biggest female-focused news by industry. Have news to share? Email us at tips@bossbetty.com.

ADVERTISING & MEDIA: Is the CMO role going the way of the dodo? So says AdWeek, and the newly announced departure of McDonald’s Global CMO Silvia Lagnado, who will not be replaced, gives credence to the idea. While nobody will wear the CMO crown at Mickie D’s, the company did create two new SVP marketing roles, both of which will be filled by men. [AdAge]

FINANCE: Janet Yellen was not into the Bank of England job. Didn’t apply. Brexit was apparently not appealing, go figure. [Reuters] In the insurance world, Progressive was ranked 391 on the Fortune Global 500 list with about $32 billion in annual revenues. [Fortune]

SCIENCE & HEALTHCARE: Gail Boudreaux’s Anthem was no. 79 on the Fortune Global 500 list with $92 billion in revenues. [Fortune] Two women in Chicago are responsible for most generic prescription drug names. [LAT]

TECH & ENGINEERING: Ginni Rometty’s IBM fell 22 spots to rank 114 on the Fortune Global 500 list, despite achieving annual revenue growth for the first time under Rometty; Safra Catz’s Oracle clocked in at 307 with just under $40 billion in revenues as it works to compete in the cloud computing space. [Fortune] Read this trans woman’s take on gender in the tech industry. [Fast Company]