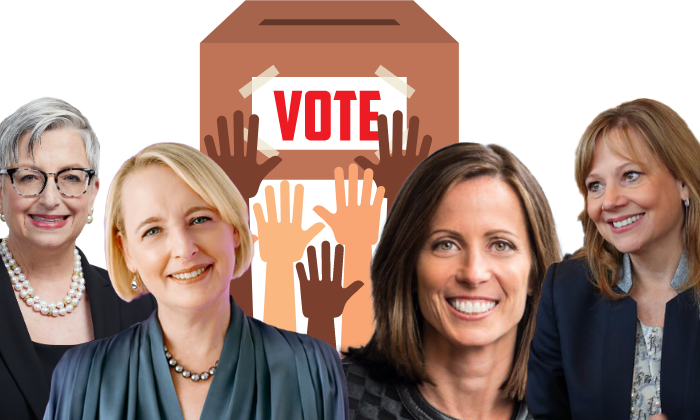 Given corporate America’s newfound responsiveness to the country’s dire political situation, Boss Betty wondered who among the country’s top women CEOs — those whom we so often turn to for career wisdom and hold up as paragons of professional excellence — is using the power of their platforms and companies to stand up for democracy. And who isn’t.

It’s no secret that plenty of chief executives and the companies they run were enablers of President Trump and his allies. It is not a stretch to say that some of these titans of industry bear varying degrees of responsibility for last week’s armed assault on the U.S. Capitol, whether by bankrolling them literally — as, pre-election, Oracle CEO Safra Catz did, along with so, so many other executives — or by simply expending their considerable sums of social capital with boisterous shows of support when it worked for them and complicit displays of silence when the truths proved too inconvenient.

It’s very much worth noting that the (much belated) willingness of top corporate executives to speak out and take action is of particularly critical importance right now: Globally, business has replaced government as the most trusted institution — “the only institution deemed ethical and competent” — according to the annual Edelman Trust Barometer, which was released Wednesday. The population’s dependence on business leaders as (relative) truth-tellers makes it all the more imperative that they act as such. It is also worth noting that women CEOs have more to lose by speaking up than their male counterparts — they generally have less readily available social capital and are judged more harshly by colleagues and investors. But if ever there was a time…

Here are the women S&P 500 CEOs who have publicly jumped into the fray:

CEO/Company: General Motors, Mary Barra
Public Statement: “The peaceful transition of power is a cornerstone of American democracy, and regardless of politics the violence at the U.S. Capitol does not reflect who we are as a nation.” Read the whole tweet.
2020 election cycle donations: Barra gave $8,000 to GM’s PAC.
Company action: Suspended all political donations.
Related 411: Barra was one of the first CEOs to abandon Trump’s powerful business council in 2016 after his incendiary remarks supporting white supremacists.

CEO/Company: Adena Friedman, Nasdaq
Public Statement: From the company, not Friedman herself, “Nasdaq shares the public’s concern regarding the deadly events that took place within the U.S. Capitol building. We hope our policies reflect our optimism about the future of America.” Read the whole statement.
2020 election cycle donations: Friedman gave $10,000 to the Nasdaq PAC, about $10,000 to Democratic candidates and PACs and $2,000 to Republican Sen. Pat Toomey, who called for Trump’s resignation following the Jan. 6 insurrection.
Company action: Suspended political contributions to the 147 U.S. lawmakers who voted against election certification.
Related 411: Nasdaq appears to be relatively progressive, as recently evidenced by its push for diversity on boards.

CEO/Company: Julie Sweet, Accenture
Public Statement: “Our elected leaders must stand together to support democracy, accept this free and fair election and bring to justice the perpetrators of today’s violent assault on our country.” Read the whole tweet.
2020 election cycle donations: Prior to Sen. Ted Cruz challenging President-Elect Joe Biden’s election victory, falsely claiming election fraud, Sweet gave a combined $16,200 to Cruz for his bid for the presidency and senate campaign.
Company action: N/A
Related 411: Sweet was one of the members of Trump’s American Workforce Policy Advisory Board, led by Ivanka Trump. Her husband, Chad Sweet, was chairman of Ted Cruz’s 2016 presidential campaign. He published a statement last week saying that he no longer supported Cruz.

CEO/Company: Carol Tomé, UPS
Public Statement: “We are appalled by the lawlessness and violence that unfolded at the U.S. Capitol … The outcome of the recent elections is clear and a peaceful transition of power is necessary.” Read the whole statement.
2020 election cycle donations: Tomé gave $4,600 to the UPS PAC.
Company action: Suspended all political donations.
Related 411: UPS was one of the top PAC donors to the 147 Republican lawmakers who attempted to overturn the Electoral College vote, according to the Center for Responsive Politics.

Here are the S&P 500 companies run by women that have made changes to their political giving. These CEOs have yet to make public statements about the attempts to overturn the election:

CEO/Company: Lynn Good, Duke Energy
2020 election cycle donations: Good gave $10,000 to the National Republican Senatorial Committee and $9,000 to Duke’s PAC.
Company action: Suspended all political donations.
Related 411: Duke’s PAC gave money to Rep. Madison Cawthorn, who voted against election certification and was at the Trump rally directly before the assault on the Capitol.

CEO/Company: Kathy Warden, Northrop Grumman
2020 election cycle donations: Warden gave $6,450 to the Northrop Grumman PAC.
Company action: Suspended all political donations.
Related 411: Northrop Grumman was one of the top PAC donors to the 147 Republican lawmakers who attempted to overturn the Electoral College vote, according to the Center for Responsive Politics. The company was the first defense manufacturer to stop its political contributions.

On the notably absent-from-the-fray front is Oracle CEO Safra Catz, who, during the 2020 election cycle, made a $130,600 contribution to Trump and more than $136,000 to other Republican candidates, including House Minority Leader Kevin McCarthy and Rep. Jim Jordan, both of whom voted to overturn the election results. The sums of her contributions made her quite an outlier in the CEO field, especially among other women chief executives. Oracle founder and Chair Larry Ellison was a huge Trump booster during the outgoing president’s campaign. While many other tech companies rushed to halt political contributions and condemn the attack on the Capitol, not so for Oracle, which has been entirely silent on that matter.

Please note this story will be updated as more information is made available.