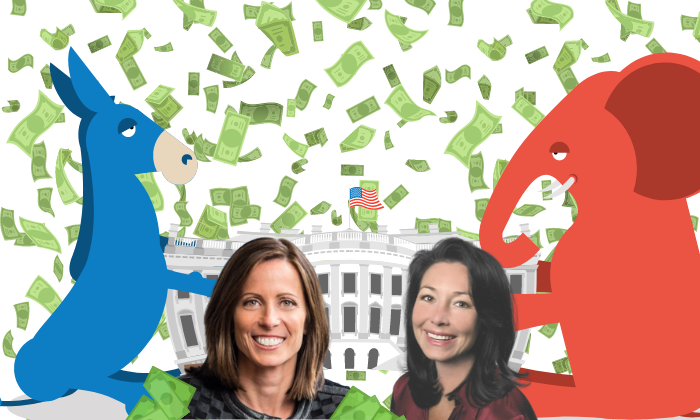 by Heather Grossmann & Kaitlyn Urban. This article was produced in partnership with

Mixing business with politics has not always been in vogue and does not always go well — the past couple of years have yielded plenty of examples of when the combo has gone seriously awry, whether from the perspective of top company brass, employees or consumers. To wit: A lavish Hamptons fundraiser hosted by Related Cos. CEO Stephen Ross resulted in several celebrities (and their followers) very publicly quitting SoulCycle and Equinox, both of which Ross owns majority stakes in; CVS received a ton of backlash after reports surfaced in 2018 saying that the company was a major contributor to Trump’s reelection campaign; data-mining company Palantir faced an uprising from employees angered by the company’s involvement with Immigration and Customs Enforcement; and there are oh, so, so many more examples.

However, this week hundreds of top business school professors across the country published an open letter urging corporate executives to speak out about the election, writing that, “For a profession that incessantly proclaims the importance of corporate values, makes much ado about CSR [corporate social responsibility] initiatives, and proudly embraces a commitment to everything from sustainability, to inclusion, to ethical business practices, it is unacceptable and immoral to remain silent at this time.”

But when it comes to their wallets, most of the 32 women currently running S&P 500 companies are doing just that, Federal Election Commission filings show. See our chart below. Only a few gave money to either presidential campaign this cycle and even then — with the exception of Oracle CEO Safra Catz — only in very tiny amounts. Ten of the women CEOs did not make any individual political contributions to candidates or political action committees (PACs) during this political cycle. The vast majority of the donations that were made went to PACs formed by the companies the executives ran, rather than in support of specific candidates or parties.

Catz’s $130,600 contribution to President Trump, along with more than $136,000 to other Republican candidates and PACs, made her an outlier in the field, though in line with company founder and former CEO Larry Ellison. While FEC records show that Ellison, who now serves as Oracle’s chief technology officer and executive chairman, has not personally given any money to the Trump campaign, he did hold a huge fundraising bash for Trump at his Coachella Valley home earlier this year. Tickets to the soirée were said to be around a quarter of a million dollars and attendees could purchase a golf outing with the president in exchange for a mere six-figure donation. Requests for comment from Oracle and Catz were not returned.

On the other side of the political spectrum, and in much more modest fashion, Nasdaq CEO Adena Friedman and Ventas CEO Debra Cafaro — the only S&P 500 female CEOs aside from Catz to donate to presidential campaigns — gave a modest $2,800 and $5,600, respectively, to a PAC supporting former Vice President Joe Biden’s presidential bid.

In total, the women running S&P 500 companies made about $740,000 in political contributions this cycle — barely a drop in the bucket relative to the amounts the presidential and congressional candidates are raising. Of that sum, $359,000 went to support Republican candidates (74 percent of that from Catz), $145,000 to Democrats and the rest to PACs that support both parties relatively equally.

Following is the list of the political contributions made from January 2019 through Oct. 29, 2020 by the top women CEOs in the U.S. Note that donations under $200 are not required to be reported and that some donors contribute to so-called  “dark money” groups that are not legally obligated to disclose who gives them money.