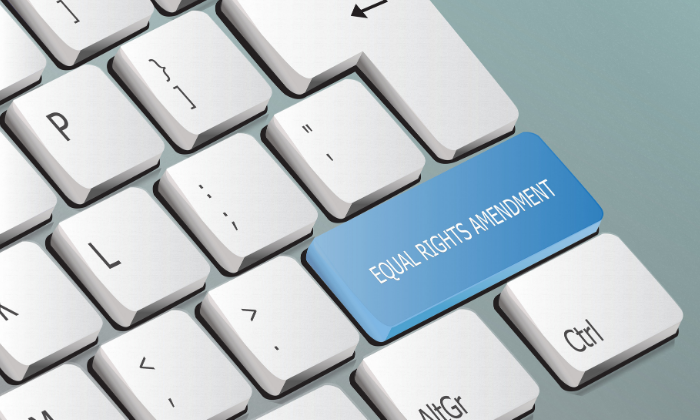 Originally published by The 19th, by Barbara Rodriguez — The House voted Wednesday to pass a resolution that would recognize the Equal Rights Amendment. It’s a moment nearly 50 years in the making — longer if you count efforts by suffragists — and part of a movement to add the Equal Rights Amendment to the U.S. Constitution, aimed at explicitly protecting people from discrimination on the basis of sex.

A similar proposal has been introduced in the U.S. Senate, where its future is more unclear.

The Equal Rights Amendment still isn’t a part of the Constitution, even though many pieces of the puzzle appear to be in place: Congress approved the proposal, and so have many state legislatures. There is now a new push, through the courts and the halls of Congress, to settle the true status of the amendment.

Here’s what to know.

What exactly is the U.S. House doing?

The House voted Wednesday on H.J.Res.17, which would effectively remove any past deadlines on the Equal Rights Amendment.

What exactly is the ERA?

The ERA, or the Equal Rights Amendment, is a proposal to add equality protections “on account of sex” to the U.S. Constitution. In other words, the measure is supposed to add gender protections to the country’s founding legal document. (Groups that support the proposal interchangeably frame it as the potential for legal protections against discrimination on the basis of gender and gender identity.)

Here’s the exact proposed language of section 1 of the ERA: “Equality of rights under the law shall not be denied or abridged by the United States or by any state on account of sex.”

What does it do? Why do supporters of the ERA think the amendment is necessary?

Supporters of the ERA believe clear language in the Constitution — which did not originally include the words “women” or “sex” — is increasingly important with a more conservative U.S. Supreme Court that could roll back existing protections. The ERA could bolster arguments in gender-based discrimination cases that pop up in America’s legal system.

Who opposes the ERA? Why?

Some opponents believe it would overturn laws or invalidate programs that have separate policies based on gender, such as educational programs or sports. However, the Supreme Court has provided clear guidelines for the legal use of gender-based programs.

Others have argued that the amendment would overturn abortion restrictions, and conservative groups have highlighted this point increasingly. It’s an argument with no clarity because it hasn’t been seriously challenged in court, though some key supporters working under the ERA Coalition have argued that the measure is not about the medical procedure. Abortion access is separately protected under the 1973 Roe v. Wade ruling.

The current arguments against the ERA is an extension of a battle that began decades ago. In the 1960s and 1970s, conservative activist Phyllis Schlafly claimed the amendment would remove various legal protections for women — an argument that found strong support among White women at the time.

Some argue that the Equal Rights Amendment is no longer needed because court rulings have gradually expanded protections against sex discrimination, rulings that often relied on the legal arguments of Ruth Bader Ginsburg, the late U.S. Supreme Court justice.

How far back do ERA efforts go?

The strategic effort to add the Equal Rights Amendment began in earnest shortly after the 19th Amendment — which granted women the right to vote, though that right was extended mainly to only White women — was added to the Constitution in 1920.

Suk’s book highlights both White and non-White women leaders of the movement. Among them was Mary Church Terrell, a founder of the National Association of Colored Women and later a founder of the NAACP. A Black woman, Terrell advocated for the amendment in the 1940s, decades after she had also championed for voting rights.

As Suk explains in her book, Terrell testified for the ERA in congressional hearings because she believed it could help working mothers, noting that many were often already breadwinners and caregivers for their families.

“I think from early on, the perspective of the working mother often came into the conversation by way of women of color, largely because for the most part it remains true today: Women of color are more disadvantaged than White women as compared to White men, if you just measure things like the pay gap, or even the percentage of women of color who are in low-wage jobs, or the proportion of women of color in essential work,” Suk told The 19th.

The ERA was stuck in a legislative committee for years until then-Rep. Martha Griffiths of Michigan used a parliamentary procedure to bring the measure to a floor vote. Others legislators, including Patsy Mink of Hawaii, the first woman of color and first Asian American elected to Congress, helped spearhead efforts, along with Shirley Chisholm of New York, the first Black woman to be elected to Congress and later the first Black woman to seek the presidential nomination for a major party.

Chisholm argued during a floor speech in 1970: “The time is clearly now to put this House on record for the fullest expression of that equality of opportunity which our founding fathers professed. They professed it, but they did not assure it to their daughters, as they tried to do for their sons. The Constitution they wrote was designed to protect the rights of white, male citizens. As there were no black Founding Fathers, there were no founding mothers — a great pity, on both counts. It is not too late to complete the work they left undone. Today, here, we should start to do so.”

So where is the amendment now?

To add an amendment to the Constitution, Congress must pass it with a two-thirds majority, and then three-fourths of state legislatures — so 38 out of 50 — must ratify the amendment.

That has happened with the ERA, but it’s complicated.

After just 35 states ratified the amendment, some thought the issue was lost. State lawmakers, led by Black women, revived the effort.

In 2017, the Nevada legislature ratified the ERA. The Illinois legislature followed with ratification in 2018. In January 2020, a new Democratic-controlled Virginia legislature became the 38th state to ratify the Equal Rights Amendment. The back-to-back-to-back votes have kicked off a new debate about the status of the amendment.

When states ratify an amendment to the constitution, the federal government must acknowledge the move to effectively make it official. That has not happened.

After the Virginia legislature ratified the amendment, an archivist with the National Archives and Records Administration refused to certify the ERA under guidance from the U.S. Department of Justice. The DOJ at the time issued an opinion citing the expired deadline on the ERA.

Democratic attorneys general in Nevada, Illinois and Virginia filed a lawsuit seeking to declare that the amendment is a part of the constitution. A federal judge dismissed the case in March 2021, arguing the attorneys general have no legal standing to sue. The legal questions raised by the lawsuit could take years to be resolved, and some expect it to end up before the U.S. Supreme Court.

Now people — members of Congress, attorneys general, those who support the ERA and those who oppose it — are trying to figure out what happens next.

Does missing the deadline mean it has to start over?

It depends on who you ask.

The Trump Justice Department believes the deadline was binding.

People who support the ERA argue that the original deadline was not in the amendment text that states ratified, but rather part of a joint resolution. They believe a new Congress can pass another resolution that effectively removes the deadline.

Attorneys are trying to sort this all out through litigation. Supporters of the ERA have sent a letter to President Joe Biden and Vice President Kamala Harris asking them to ensure the archivist acknowledges the amendment’s ratification.

So what does happen next?

As the legal questions get sorted out in court, some members of Congress want to use their political power to remove the deadline for states to ratify the ERA.

In 2020, the Democratic-controlled House passed a resolution affirming that the amendment is a part of the constitution. The Republican-controlled Senate did not take up the measure.

In the Senate, it’s unclear whether ERA supporters will need a simple majority vote or 60 votes. A handful of Senate Republicans support the ERA, but as of early March 2021, not enough for 60 votes.

Supporters of the ERA believe the resolutions in Congress that affirm the amendment and remove the deadlines are an important step while the legal questions play out in court. They believe the election of a Democratic president, and renewed awareness of the amendment, will codify the ERA in 2021. Whether that’s true remains unclear.