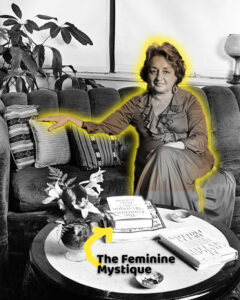 Betty Friedan in her apartment, as photographed by Lynn Gilbert in 1978, New York.

The trailblazing feminist Betty Friedan would have been 100 this week. The likes of Gloria Steinem, Black Lives Matter co-founder Alicia Garza and Sen. Elizabeth Warren celebrated her achievements with a virtual event on Thursday, 15 years to the day after her death on her birthday. Here’s the basics of the very un-basic Betty Friedan, one of the (many!) inspirations for Boss Betty.

1. She is credited with kicking off second-wave feminism (here’s a good primer on the “waves”) with her seminal work on gender politics, “The Feminine Mystique.” The book, published in 1963, chronicled “the problem that has no name,” which, very basically put, was the unhappiness of housewives confined solely to the realm of cooking, cleaning and child-rearing. The book entirely reimagined the role of women in society and was, and is, considered a feminist manifesto. (BTW, Parker Posey is the eerily perfect narrator for the audiobook version — something about giving voice to the disaffected-but-deadening effects of “the problem that has no name.”)

2. Her approach to feminism was problematic. Like almost every other historical power broker, Friedan was pretty flawed. “As with everything Betty, it’s complicated,” historian Rebecca Jo Plant recently told the New York Times. “Today we celebrate an inclusive, intersectional feminism,” which was not necessarily the case in Friedan’s time. She initially viewed lesbians as a threat to the women’s movement (she notoriously referred to gay women as the “lavender menace,” believing that the prevalent stereotype of man-hating lesbians would marginalize its mission) and ignored Black and working class women in “The Feminist Mystique” (more on that here). Friedan was known to be prickly and got into it with Gloria Steinem and Bella Abzug, calling them “female chauvinist boors” for what she deemed to be unwarranted extremism. Her views demonstrably progressed in subsequent years but she remains — as, again, do so many — a complicated figure.

3. Friedan founded the National Organization of Women (NOW) in 1966 and served as its president for the first four years of its existence, helping to pass laws against workforce gender discrimination and legalize abortion. She also helped to form NARAL, an advocacy coalition that now consists of about 2.5 million members supporting access to abortion care, birth control, paid parental leave and protections from pregnancy discrimination.

4. To celebrate the 50th anniversary of the 19th Amendment (which turned 100 last August), Friedan organized a nationwide Women’s Strike for Equality in 1970 to draw attention to systemic sexism and led a march of more than 50,000 people in New York City. The action successfully drew widespread attention to the issue of gender inequality and helped to further galvanize the women’s rights movement.

5. If you watched “Mrs. America,” you already know that Friedan was an ardent supporter of the Equal Rights Amendment, which the Library of Congress calls “one of the most contested pieces of legislation in the twentieth century.” The ERA consists of only 51words that can be summed up in the first 23: “Equality of rights under the law shall not be denied or abridged by the United States or any State on account of sex.” Crazy controversial, right  🙄? After the ERA was passed in the House and then the Senate in ’72, Friedan got to work lobbying the states to ratify the amendment. Cut to February 2021 and still no ERA; however, both President Joe Biden and Vice President Kamala Harris have said they support the ratification of the amendment and two weeks ago, Sen. Carolyn Maloney wrote the new administration urging them to make good on their word.