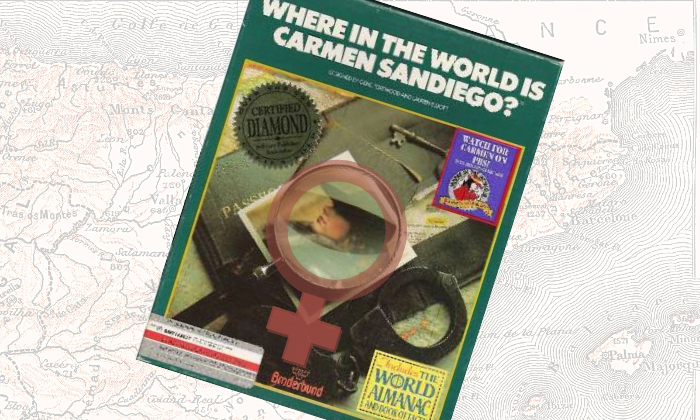 We noticed that a lot of the headlines circulating this week about women and work were coming from beyond the boundaries of our usual geographic purview, AKA the U.S. of A. So we decided to play a Boss Betty version of Where in the World is Carmen Sandiego? in which we’re gumshoes for ACME Detective Agency tracking down instances of patriarchal malfeasance around the world. Here’s what our sleuthing 🔎 turned up…

🇪🇬 Egypt’s first female ship captain, Marwa Elselehdar, was blamed for the Suez Canal blockage. At the time, she was hundreds of miles away, working as a first mate on another vessel. “I was shocked,” she said of discovering the online rumors that somehow she was responsible for the Ever Given getting wedged in the Suez, bringing one of the world’s biggest shipping routes to a standstill. “I felt that I might be targeted maybe because I’m a successful female in this field or because I’m Egyptian, but I’m not sure,” she said. Several fake Twitter counts and a doctored news story spurred the rumors. [BBC]

🇦🇺 Australia’s Parliament House described as the “most unsafe workplace in the country.” Several weeks after a legislative staffer accused a senior colleague of raping her in the ministerial wing of Parliament House, thousands of women across the country have come forward to share their stories of harassment and abuse, both in the political realm and far beyond. The country’s sex discrimination laws are now being changed to include MPs, judges and other public servants; however, the government is not in favor of a proposal to legislate rules around sexual harassment in the private sector. [NYT & Guardian]

🇹🇷 Turkey’s big chair fail. European Commission President Ursula von der Leyen, the first woman to hold that post, was left awkwardly standing as Turkish President Recep Tayyip Erdogan and European Council President Charles Michel settled themselves comfortably into two gilded chairs during a meeting of the three leaders in Ankara on Tuesday. Von der Leyen was eventually given a seat on a sofa a dozen feet away, opposite a lower-ranked official. “[She] should have been seated in exactly the same manner as the president of the European Council and the Turkish president,” said her spokesperson. [WaPo]

🇫🇷 France finally says “moi aussi.” France’s #MeToo movement — which used the hashtag #BalanceTonPorc, or “Expose Your Pig” — faced a huge amount of backlash initially, with several high-profile women (including screen legend Catherine Deneuve) signing a letter denouncing the movement. But things seem to have taken a turn this year as a string of powerful men across politics, media, academia, sports and other industries face public accusations of sexual abuse. [NYT]

🇯🇵 Japan’s powerful men just keep on making gendered gaffes. The country, which ranks 120 out of 156 countries in the World Economic Forum’s latest Global Gender Gap Index, continues to garner headlines for its retrograde stance on gender equality. There was the former Tokyo Olympics chief who said that women talk too much in meetings and that he finds it very annoying and the other Olympics official who suggested that a female celebrity in Japan dress up as an “Olympig.” The country’s ruling party said women could observe key meetings but not speak at them. In response to Japan’s declining birth rate, a local government official ignorantly told new employees this week that they just needed to “play around” more. [CNN]