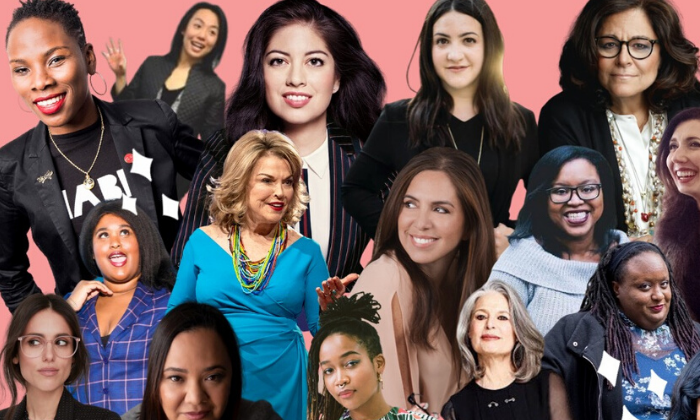 Some of the women interviewed for “Brag Better.”

Below is an excerpt from professional development expert Meredith Fineman’s new book, “Brag Better:  Master the Art of Fearless Self-Promotion,” a guide to self-advocacy for highly competent professionals who struggle to communicate their accomplishments to others. If you do a lot of work that goes unnoticed, you need a mindset shift and strategy for communicating your achievements and skill sets to others. Buy the book here.

LANGUAGE IS OUR MOST POWERFUL TOOL

The most powerful tool that we have at our disposal is language. I probably don’t have to convince you of that, but it’s worth repeating, because we often don’t consciously decide how we want to communicate about ourselves. It is how we communicate, signal success and failure, and interact with the world around us. To Brag Better, we need to create our own language to help us hype ourselves. While I cannot give you the words entirely, there are guideposts that will help.

If you use language in a targeted, thoughtful, actionable, and directed way, the opportunities for you and your work are endless. We are all talking, but are you really considering your word choice and how exactly you’re describing your work? It’s the difference between having people half- heartedly listen to you and getting them to zero in on what you’re saying. The more targeted your impact, the better.

Each word you use matters, and the wrong ones can tank your brag or your business prospects (not to mention misspelled words— oy, is that a great way to signal that you’re not paying attention). The winning formula here is to combine a consistent message with a tone and word choices that are impactful and uniquely you. Figuring out your ideal communication style takes time, but makes you someone people want to listen to, pay attention to, and reward.

Words are a superpower. Your chosen superpower words will inform the way you talk about yourself. They have a few powers: First, they help you feel good and center your brags. Then, they serve as descriptions that will help you create your brags.

I’ll use myself as an example. I care that my voice and my brags are funny, thoughtful, and helpful. I want you to find me hilarious, and I want you to feel that I put a lot of time and effort into my work. But I also want to help you achieve your goals. That’s why I chose this combination of three “superpower” words for myself— funny, thoughtful, and helpful. You don’t have to have three, but it’s a good place to begin. Your chosen words create a framework and an attitude around your voice and will be your ideal way of describing yourself when you Brag Better. I chose these words because that’s how I’d like others to see me, but they also further my goal of the voice I want to create.

For each post I make, or story I write, I want to fulfill at least one of those adjectives. I don’t have to nail all of my adjectives at one time. I might be funny in one post, and then thoughtful and helpful in another post. I want to ensure that my superpower words are conveyed with continuity over time.

What are three “superpower” adjectives you can identify when you step back and think about your voice and what you want to communicate? If I’m ever unsure of how to word a brag, or how to practice a particular introduction, I go back to my superpower words and make sure that whatever I’m trying to communicate matches up with my long- term intention. It’s a baseline for consistency, which is one of the keys to success.

VERBAL UNDERCUTTING: WHAT NOT TO SAY

Sometimes, knowing how to Brag Better is knowing what not to say. Bragging Better strategy includes ending any habits you might have of verbal undercutting, or self-sabotage in the form of negative sentiments toward yourself. Aside from the fact that it’s hard to be around someone who constantly knocks themselves down, it undermines your work.

There is a fine line between self-deprecation and self-loathing. The former says, “I can poke fun at myself and I am self-aware but still serious,” and the second promotes negativity, drives people away, and has the opposite effect. That is a line we can walk together, and one that you will always need to be conscious of. We are all guilty of this, but the more aware of it you are, the more you can remove it from your language.

It also requires some trial and error. During speeches, I often make jokes about my habit of wearing jumpsuits and that I’m there to help the audience Brag Better but also “change their oil.” That one goes over well. I am making fun of my outfit but also not totally insulting myself. If you get too self-deprecating, you’ll see some grimaces. Sometimes my humor is too dark and, well, it freaks people out. It took some calibration, so don’t worry if you mess up at first.

Sometimes verbal undercutting isn’t overt. It can be more subtle, but just as damaging. I had a client, we will call her Stacy, who consistently referred to the work she was doing in the passive voice. In true Qualified Quiet fashion, she had already spent two decades killing it in the retail world, and yet she kept saying she was “trying” to disrupt the industry. She had already spent twenty years doing so. It drove me nuts.

Stacy had created a technology and fashion platform that was in its early stages, but she kept acting as if she hadn’t done squat. The word “trying” or “attempting,” qualifiers that tell the reader you aren’t doing the work, need to be avoided. These qualifiers communicated her hesitancy and doubt in herself to potential users, customers, and even investors. It made them doubt her abilities, too. Had I not known about her talents, I would’ve thought she was significantly more inexperienced than she was, and I’m not sure I would have taken her as seriously as she deserved.

This is just one example of subtle verbal undercutting. You want to use an active voice versus a passive one to show your activity and forward movement. This goes back to one of our core tenants: Bragging is stating facts. So, state them loud and with intention. Stacy created and founded a technology company. Fact. She has two decades in the industry and is full of insider knowledge. Fact. Her product actively differed from anything else out there. Fact. Don’t take yourself out of the running before you’ve even set foot on the track. You’re doing yourself a disservice, and the disservice extends to anyone working for or with you.

A more overt way of undercutting yourself verbally is putting yourself down, even as it directly relates to sharing your brags, which is my ultimate pet peeve. Whether it’s a phrase like “shameless plug,” “humblebrag” (the worst!), or “I hate to brag, but…,”  you need to cut it out. Please, for me. These undercuts are less overt than saying “I suck!,” but they are just as dangerous, almost undercuts in disguise. It can feel like a reflex — we have all been conditioned to say these sorts of things when we are uncomfortable or anxious, or we feel like we aren’t allowed to be proud. That’s why Bragging Better starts with a feeling — being proud of and grounded in the work you have actually done.