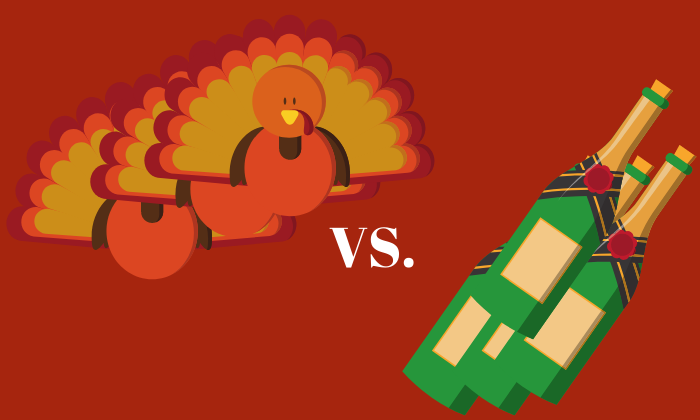 Welcome to the Thanksgiving edition of the Boss Betty newsletter, in which we award turkeys to the news that makes us want to totally tryptophan out this holiday and champagne bottles to the items that deserve a “Cheers!” Without further ado:

There’s a second lawsuit seeking to overturn California’s law requiring women on boards, which mandates that any public companies headquartered in the state have at least one female director by the end of this year. The plaintiff, a Libertarian group called The Pacific Legal Foundation, is suing on the grounds that the legislation violates the equal protection clause of the Constitution. Um, no. That argument is clearly antithetical to the spirit of the clause, which is part of the 14th Amendment.

Companies that appoint women to their boards see a decrease in market value for two years. Why? Well, copious evidence shows that it’s (obviously) not because they perform any worse, so there are two potential explanations: 1) Investors are biased and perceive women as less competent; and/or 2) The stock market sees the appointments as a shift in priorities away from shareholder value in favor of social good, the horror (also, those two goals are not mutually exclusive).

Now onto the good stuff. In the spirit of giving thanks, here are the stories we’d like to raise a glass to (with some caveats, because who are we even without them?):

More and more employees are sharing their salaries via Google docs, including employment information as well as details on gender, race and sexual orientation. A couple of weeks ago journalists started entering their info into a shared spreadsheet and last week ad agency staffers began their own version. Though the salaries and other details need to be taken with a giant grain of salt (maybe a heaping spoonful) since they are unverified, sharing is caring and hopefully leads to more awareness of pay discrimination issues.

So-called “returnships” — programs aimed at encouraging people who have left the workplace to care for children or family members to return to work — are all the rage, with top firms rethinking their hiring processes as they try and get more women into the c-suite. Goldman Sachs launched one of the pioneering returnship initiatives back in 2008; now, there are more than 50 similar programs in the U.S. Read the story on Boss Betty.

The continent with the most female board representation is Africa — one out of four directors across the (very) vast region is a woman, according to McKinsey. Europe clocks in second for female board representation with 23 percent and “global laggard Latin America” has an absolutely pitiful 7 percent. The report does not cite North America as a whole but says that in the U.S., 22 percent of directors are female. Worldwide, women hold 17 percent of directorships. It’s important to note, however (as this article does), that several African nations have absolutely terrible records when it comes to gender equality.

Read the week’s breakdown of the biggest female-focused news by industry.