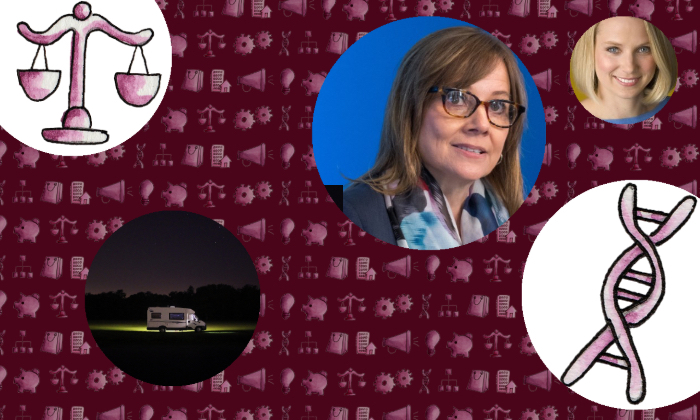 General Assembly: A handful of women are charting a new course, quite literally, as cruise ship captains, and it’s pretty cool. Female captains are a rarity but some cruise lines, including Virgin Voyages, have launched new initiatives to bring more women into shipboard management roles. It’s pretty easy to get on board with that [WSJ]. And, if you’re thinking about starting your own thing, go West, woman! San Francisco has replaced New York City as the best city for female founders, a new report shows [Forbes]. And, cause for celebration: The S&P 500 no longer has any all-male boards!  The last company to add a woman — auto services firm Copart, Inc. — appointed  CyrusOne CFO Diane Morefield to its board this week [Bloomberg].

Advertising & Media: Nora O’Donnell’s first week anchoring “CBS Evening News” did not give the network a ratings bump, despite quite the promotional push [AdAge]. Facebook marketing exec Carolyn Everson wrote a memo to its agency partners assuring them that despite the $5 billion fine the social network owes the FTC for not properly protecting consumer privacy, they are very — very, really, truly, quite — serious about handling privacy issues [AdWeek]. AdAge has two podcasts today featuring women CMOs (so much for that role going the way of the dodo): Adobe CMO Anne Lewnes discusses the company’s grand purpose, employee engagement and the importance of event marketing [AdAge], and The Knot Worldwide’s CMO Dhanusha Sivajee — at the behest of the hosts — mostly discusses lighter fare, including costume parties and “Notting Hill.” Honestly, after 20 minutes of the light pitter-patter chatter, it was time for BB to tune out — let us know if they ever asked the much accomplished Sivajee anything of note [AdAge]. Sagmeister & Walsh’s Jessica Walsh is opening her own creative shop. [AdWeek]

Energy: Here’s a look at the seven experts President Trump recruited for the Clean Air Scientific Advisory Committee, which will shape the country’s approach to ozone and other pollutants. Only one  of the recruits is a woman, all of them are anti-regulation [ClimateWire].

Finance: Mastercard vice-chair Ann Cairns talks about her remarkable career path, including being the first woman to work on an oil rig in the U.K. and aiding in the restructuring of Lehman Brothers during its Chapter 11 proceedings [Yahoo! Finance]. More than half of hedge funds assets this year will be tied to ESG factors, a new BarclayHedge report shows. Investors are seeing the long-term value in equal pay and diversity, according to Sol Waksman, president of BarclayHedge [Institutional Investor].

Law: The top law firms on American Lawyer‘s 2019 ranking take a “holistic” approach to their business, including considerations of racial and gender diversity. Taking first place was Munger Tolles & Olson, followed by Wilmer Cutler Pickering Hale, with Ropes & Gray in third [American Lawyer]. And, here’s another relevant ranking from the same pub, this one evaluating firms based on the number of women in their equity partnerships [American Lawyer]. RBG is not into changing the number of SCOTUS justices [NPR].

Manufacturing & Retail: Mary Barra’s GM had plans to roll out robotaxis this year, but that’s now a no-go, as carmakers continue to struggle with transforming the promise of autonomous vehicles into reality [IndustryWeek]. Very unrelatedly, yes, sex does sell — particularly in an industry rife with products made by straight men: sex toys. Apparently, Oregon has blossomed into a hub for women- and queer-owned start-ups specializing in vibrators and other sexy accoutrements. Brb, gotta check on flights to PDX. For a friend [Willamette Week].

Science & Healthcare: Maybe breaking up isn’t hard to do — after dumping Cigna’s Express Scripts PBM, Gail Boudreaux’s Anthem picked up a new pharmacy benefit management company, IngenioRx, and apparently the new relationship’s already paying dividends [Forbes]. Then again, Anthem did have a rough day at the market, with its stock dropping more than 4 percent [Yahoo! Finance].

Tech & Engineering: Marissa Mayer’s new venture, Lumi Labs, is developing a line of productivity apps. The former Yahoo CEO’s first product will revolve around managing contacts [The Information]. Arianna Huffington left Uber’s board, saying she didn’t have time to balance the role with her and her work as CEO of Thrive Global [CBS]. Alphabet will report its Q2 numbers Thursday, and analysts will be hungrily looking for financial details on Susan Wojcicki’s YouTube unit. [NYT] Stitch Fix’s CEO Katrina Lake talks to Kara Swisher about being a female founder, the transformation of retail and taking her company public [Recode]. Alyssa Ravasio’s Hipcamp “uses technology to get people away from technology.” Ravasio’s platform, which helps streamline the camping experience, just scored a $127 million valuation after Andreessen Horowitz led a $25 million Series B round [TechCrunch]. Raena, a startup founded by Sreejita Deb that enables social media influencers to launch e-commerce brands, raised $1.8 million in seed funding. Deb previously had roles at Amazon and Google [TechCrunch]. IBM is among 19 companies in STEM launching programs to bring experienced women back into the workforce after they’ve taken time out of their careers for caregiving or other reasons [Forbes].