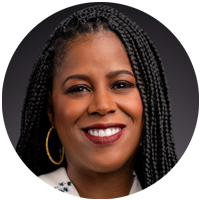 If your social circle includes educators and/or nonprofit employees, it’s highly likely that you know someone whose future financial well-being is, at least in part, dependent on the Teachers Insurance and Annuity Association of America (TIAA). The Fortune 500 financial services company announced last week that Thasunda Brown Duckett, who is currently CEO of Chase Consumer Banking, would become TIAA’s next president and CEO. TIAA largely services employees at colleges, healthcare systems and nonprofits and has $1.3 trillion in assets under management (AUM) through its retirement and investment funds.

The historic significance: Duckett’s appointment is notable given the scarcity of female chief executives in finance — brand new Citi CEO Jane Fraser is the first woman to lead a big bank in the U.S. — and because she will be only the third Black woman in history to lead a Fortune 500 company when she takes the reins at TIAA in May. Former Starbucks executive Roz Brewer is set to become the second African-American woman to hold a permanent CEO role at a top U.S. company (former Xerox CEO Ursula Burns was the first) when she takes the top spot at Walgreens later this month. Bonus: The other historic aspect of this news is that it will be the first time a Fortune 500 company has handed the reins from one Black CEO to another. Do you know how many times the chief exec role has been passed from one white man to another? Yeah, we can’t count that high either.

Notable work history: As CEO of Chase Consumer Banking, Duckett was responsible for around 50,000 employees across 5,000 bank branches handling $600 billion in deposits 🤑🤑🤑. She also oversaw Chase’s first major branch expansion in 10 years and its development of sophisticated digital tools for customers. From 2013 to 2016, Duckett was CEO of Chase Auto Finance and, prior to that, she held multiple management roles in the mortgage business at JPMorgan Chase. Before joining Chase in 2004, she kicked off her career at Fannie Mae, where she worked her way up to the role of director of Emerging Markets. Duckett currently serves on Nike’s board of directors, which she joined in 2019.

What she’s passionate about: Financial inclusion and empowerment. “When you know what it’s like to look in the refrigerator and just see baking soda, or know what it’s like to have your lights turned off, personal finance is important,” she told the New York Times in 2019. At Chase, Duckett is the executive sponsor of two programs aimed at helping to close the wealth and education gaps for Black Americans. She also serves on the steering committee for the bank’s Women on the Move initiative to advance women in their careers.

On who inspires her: “When I think about who influences me, and I talk about this publicly, it is the janitors and the cooks and the secretaries who look like me who first entered corporate America that over time allowed me to exist. I draw a lot of inspiration from those shoulders that I’m on,” she told American Banker in 2019.

On a more personal note: The finance exec, 47, was born in Rochester, New York but left the East Coast with her family (including two older brothers) for Texas after her father lost his job working in a Xerox warehouse. Her mother was a teacher. Duckett helped her parents buy their first home after she graduated from college. She majored in finance and marketing at the University of Houston and went on to get her MBA from Baylor University. Duckett now lives in Connecticut with her four children and her husband Richard, who is an engineer, Marine and stay-at-home dad. Friends and colleagues call her “T.”