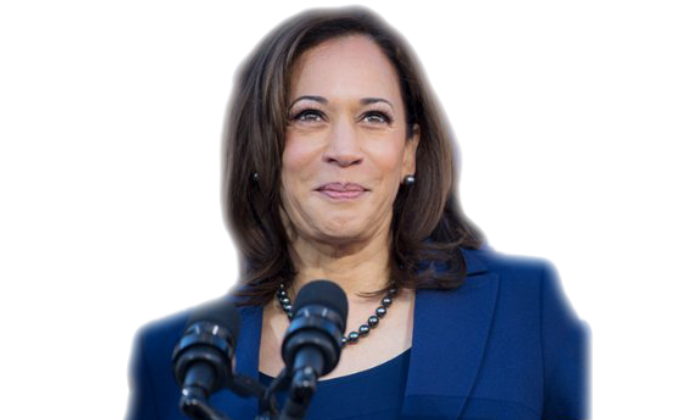 When California Sen. Kamala Harris took the stage Wednesday night to accept the Democratic nomination for vice president, she brought her full self to the stage, making the case for confronting systemic racism, addressing the coronavirus pandemic and electing former Vice President Joe Biden amid the threat of voter suppression.

Harris’ speech was the climax of a two-hour tribute to the contributions of women to American democracy and political pioneers, filled with symbolism and substance. She was preceded by Barack Obama, the country’s first Black president; Hillary Clinton, the first woman nominated for president of a major political party; and Nancy Pelosi, the first woman elected as Speaker of the House.

Harris, 55, becomes the first woman of color to be nominated for vice president on a major party ticket, and the third woman to be nominated for the No. 2 slot. In an interview with The 19th last week, she said Biden’s decision to add her to the ticket took “audacity,” and that it was one he made despite the risk.

The night came a day after the nation observed the centennial anniversary of suffrage, and the program also included a recognition of the milestone. Harris’ speech referenced the landmark legislation — but with an asterisk for the Black women who would have to fight for nearly half a century for their access to the ballot.

In her remarks, Harris called the names of the Black suffragists whose names have often been erased or omitted from the history of the movement — including Mary Church Terrell and Mary McLeod Bethune — as well as civil rights leaders Fannie Lou Hamer and Diane Nash. She name-checked Shirley Chisholm, the first Black woman to run for president as a major party candidate, in whose spirit Harris launched her own campaign for president in January 2019.

“Without fanfare or recognition, they organized, testified, rallied, marched and fought — not just for their vote, but for a seat at the table,” Harris said, wearing a pearl necklace in a nod to the founders and incorporators of her sorority. “They paved the way for the trailblazing leadership of Barack Obama and Hillary Clinton. And these women inspired us to pick up the torch, and fight on.”

In humanizing the policies Biden has said will be part of his agenda as president, women were often the face of the evening, from struggling small business owners and immigrants to victims and survivors of gun violence and people dealing with the fallout of the pandemic.

Women are the majority of the electorate and the U.S. workforce, and have been the majority of the American population disproportionately impacted by and responding to the coronavirus pandemic from an economic, mental health and labor perspective. Polling shows Biden leading among women voters, and President Donald Trump has attempted to appeal to suburban women in particular by raising the spectre of crime in their neighborhoods under a Biden-Harris administration.

While some Americans may recognize Harris from her withering Senate Judiciary inquiries, the wife, stepmother, sister and aunt also humanized herself. Many heard her life story for the first time Wednesday, as voters begin to focus on the 2020 election, now 11 weeks away.

Harris told her story as the daughter of immigrants who came to America and became activists, taking her along as they protested in her native Oakland, California.

“My mother instilled in my sister, Maya, and me, the values that would chart the course of our lives,” Harris said. “She raised us to be proud, strong Black women. And she raised us to know and be proud of our Indian heritage.”

It was a story she told more forcefully than during last year’s primary, as issues of race and gender stalled her campaign and forced her off the campaign trail before voters could weigh in on her candidacy. On Wednesday, she leaned into both, speaking plainly about the need to address the dual pandemics of coronavirus and racism which have been laid bare in recent months.

“The virus has no eyes, and yet it knows exactly how we see each other — and how we treat each other,” she said. “And let’s be clear — there is no vaccine for racism.”

“We’ve got to do the work to fulfill that promise of equal justice under law. Because none of us are free until all of us are free,” Harris continued, quoting Hamer.

Harris ended by telling voters that the country is at “an inflection point,” bookending her appearance at the start of Day Three of the convention, in which she encouraged viewers to come up with a plan to cast their ballots. It was a message that echoed an urgency conveyed by many of the evening’s speakers, and a theme that has reverberated through the week.

Harris tied Biden’s election to the idea that November is an existential moment for democracy, arguing that she and Biden will take on the dual pandemics and usher in a better America.

“Make no mistake, the road ahead will not be easy,” Harris said. “We will stumble. We may fall short. But I pledge to you that we will act boldly and deal with our challenges honestly. And we will act with the same faith in you that we ask you to place in us.”