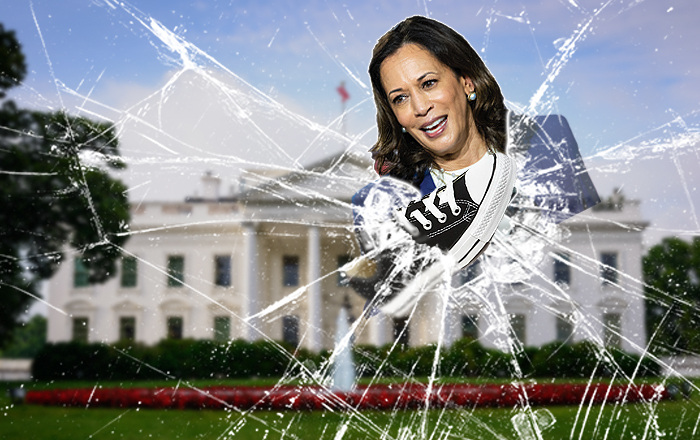 When there’s an outgoing administration whose leader was caught on tape gleefully extolling sexual assault — and whom 26 women have accused of sexual assault and who told female voters “we’re getting your husbands back to work” — it’s a pretty darn safe bet that the incoming team will do more to advance gender equality.

When that incoming administration has Vice President-Elect Kamala Harris’s Chuck Taylors smashing through the White House’s proverbial glass ceiling, becoming the first woman — and first Black and first Indian American — veep-to-be, it seems to be a done deal.

“For the last four years there’s been an absolute vacuum of any commitment to equity — in fact, it’s been the opposite. It’s been an aggressive attack on equity,” said Lauren Leader, an expert on the economic gender gap. “It’s almost incalculable the number of doors and the number of windows this has opened,” she said of the significance of Harris’s imminent ascendance to the vice presidency.

Times Up’s Latifa Lyles shared a similar sentiment, saying that now “girls and boys across this nation will see and learn from a new generation of women leaders.” On a more personal note, Lyles said that, “As a Black woman who has devoted my career to improving the lives of women in the workplace, I know that great strides are possible in this extraordinary moment.”

Generally speaking — and it is “general” as it’s early, early days — the Biden-Harris administration appears poised to make a good hard policy push towards gender equality in the workplace, several experts said.

“The incoming administration has an exceptional gender equity platform,” said Erika Moritsugu, who heads up congressional relations for the National Partnership for Women & Families, noting that Biden committed to creating a White House Council on Gender Equity.

“Vice President-elect Harris will bring a lifetime of lived experiences to her position. She doesn’t just intellectually understand gender and racial discrimination and harassment, she has lived it,” Moritsugu continued. “During her presidential campaign, she developed an incredibly forward-thinking platform around gender and racial equity, including equity in the workplace.”

Lyles, who is vice president of Times Up’s Advocacy and Survivor Initiatives, was glad to see that the Biden-Harris plan for economic recovery includes expanding access to paid leave and child care, and fighting for equal pay and an end to other forms of workplace discrimination and harassment. “These leaders understand the issues facing women because they’ve lived it themselves, from realizing they are getting paid less than men to facing sexual harassment, assault, or retaliation on the job,” she said.

However, numerous sources expressed worry that the incoming administration’s stated policy priorities around workplace gender equity — an issue made even more pressing by the pandemic’s disproportionately negative economic impact on women — could be derailed, whether because of the multiple crises the new administration will be facing on day 1 or legislative gridlock.

“There’s going to be calls for austerity — ‘we can’t do this, we can’t spend this money,’” warned Nicole Mason, CEO of the Institute for Women’s Policy Research. “But we can’t afford not to … As the women who got this administration elected, we have to say ‘no, not this time.’ We need structural fixes and unless we have them, women are going to continue to exit the workforce and women are half the economy, they’re half the workforce.”

Leader, the economic gender gap expert, said that there were “definitely people in the policy community who were pushing the Biden team before the election to really put a gender lens on every dimension of the economic agenda” but that “it’s not at all clear whether they’re going to … given everything else they have to do and deal with during this crazy time.”

When it comes to the nitty-gritty of actually legislating workplace gender equality, much — but not all — will come down to which party has control of the Senate, and that won’t be decided until Georgia’s runoffs at the beginning of January.

Lorraine Hariton, who is CEO of the global nonprofit Catalyst and worked for Hillary Clinton in the State Department, has known Harris since 2006. “Kamala is the right person at the right time with the right capabilities and skills to really help drive the agenda for women,” Hariton said, but cautioned, “We’ve got to be realistic about the levels of power and how much can be accomplished on any agenda. It takes the three branches of government.” Attempts to reach the Biden-Harris transition for comment were unsuccessful as of press time.

When it comes to which issues, and the attendant proposed legislation, need to be prioritized to address workplace gender inequities, sources were generally in agreement.

Putting in place legislation that provides affordable childcare is absolutely critical, advocates insist, citing both the Childcare for Economic Recovery Act and the Child Care is Essential Act.  Mason (Institute for Women’s Policy Research) said that, while there will be immediate demands for infrastructure improvements from the new administration, the focus shouldn’t be on, for example, roads or solar panels. “We need infrastructure like childcare … That’s the kind of infrastructure we need in the moment to make sure that women can reenter the workforce,” she said. “If childcare was on the ballot this election, it would have passed in every state.”

Sarah Brafman, senior policy counsel at the legal advocacy nonprofit A Better Balance, agreed  that there is strong bipartisan support for shoring up childcare. “When these issues come up, people across the board are heavily supportive of them,” she said. “If we don’t spend the money to ensure that we have a strong childcare industry we can’t get the economy back up and running.”

Another “must” on the priorities list is paid family and medical leave, which the president-elect supports and says is a priority. “We really need a federal standard. We need 12 weeks of job-protected paid family leave and medical leave,” said Brafman. The vice-president elect was a co-sponsor of the 2019 Family and Medical Insurance Leave Act in the Senate, which would give workers up to 12 weeks of partial income.

The Pregnant Workers Fairness Act, which would require that reasonable accommodations be made to allow pregnant women to work without putting themselves or their pregnancies at risk, is also a priority for experts and advocates, who seem optimistic about its prospects. Brafman  said that the bill passed the house with “very strong bipartisan support” and that it was “teed up and ready to go” for the new administration.

Another piece of the legislative puzzle is the Paycheck Fairness Act, a proposed law Harris co-sponsored that would require companies to prove that any differences in pay are not based on gender and would enforce harsh penalties for violations. The Biden-Harris transition website commits to passing the bill. “The Paycheck Fairness Act is something Obama made progress on that we can move forward on — we absolutely need to address pay equity issues,” said Catalyst’s Hariton.

WINS AT THE STATE LEVEL

There were also a handful of major state-level election-related items that portend real progress in the fight for gender equality in the workplace. “Across the board, we saw wins for gender equity on the ballots,” the National Partnership for Women & Families’ Moritsugu said.

Lyles of Times Up agreed, saying that state-level momentum on issues such as paid leave and fair wages is critical in moving the needle. “We know that state action and movement on policies at the local level has been key to moving our national policies forward,” she said. “We are particularly encouraged that since #metoo went viral three years ago, more than 19 states have enacted new protections against workplace harassment.”

Florida’s vote to increase the state’s minimum wage to $15 an hour is good news for women, who are much more likely than men to work in low-wage jobs. The new rate — which will happen incrementally over six years — should have a positive impact on Florida’s gender pay gap and “will help Black and brown women who hold a disproportionate share of minimum wage jobs,” said Moritsugu. Both Biden and Harris support a federal minimum wage of $15.

Thanks to Colorado voters, employers in the state must provide 12 weeks of paid family and medical leave to workers. The program will be funded by employers and employees via payroll premiums; companies with fewer than 10 people on staff are not required to participate. “As families continue to struggle with the Covid-19 crisis, the need for Paid Family Leave is more obvious now than ever before,” said Leng Leng Chancey, executive director of the 9to5 Working Women’s Association. The organization worked to engage Colorado voters around the issue and make it the ninth state in the country to pass a paid leave law.

And, Vermont, New Hampshire, Delaware, Virginia, Kansas and Colorado now have transgender state legislators. In 2021, a record seven trans lawmakers will report for duty at state houses across the country (or, virtually, as the case may be). “Having transgender state lawmakers will highlight the importance of workplace harassment legislation including gender identity,” Moritsugu said. Biden thanked the transgender community in his victory speech last weekend and this week chose a transgender veteran to be part of his Department of Defense transition team. The president-elect said he plans to overturn the Trump administration’s ban on transgender people in the military.

Skipping a bit ahead, to, say, Jan. 20, the prescription offered by several people involved in workplace justice initiatives is essentially to “go big.” Times Up’s Lyles said it was crucial to take this “unprecedented opportunity to address the longstanding issues that impact women in our everyday lives, including structural barriers that prevent our full participation and a fair shot in our society.”

Mason of the Institute for Women’s Policy Research said it was important to “be supportive [of the new administration] but make it clear that we’re not going back to the way it was.” She noted that her organization was also looking at what is possible in the 2022 midterms for advancing workplace equality.

Leader, the economic gender gap expert, emphasized that a lot of ground had been lost in the past couple of years and that while “it’s not rocket science,” it would take a tremendous effort to reverse course. “Biden is going to need to set a big and bold agenda … What he should do is make it clear that economic equity — gender and racial — is the number one focus of the economic agenda. The equitable tide lifts all boats.”