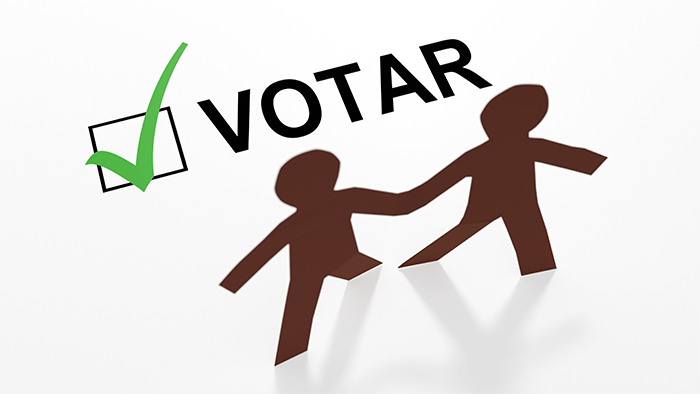 By Chabeli Carrazana | Originally published by The 19th

At her majority immigrant Catholic church in a small, conservative town tucked between Austin and San Antonio, Ashleen Menchaca-Bagnulo has watched her community shift.

Four years ago, religious freedom and abortion were the driving forces behind why some members of her largely Mexican-American congregation voted for President Donald Trump, even if they didn’t agree with his stance on immigration. A compromise, they said then.

But this year, coronavirus has reshuffled those priorities. When it was the Latinx community that got sick at higher numbers, when it was them who lost their service sector jobs, and them who had to worry about bringing the virus home to their intergenerational families. When the parade of trucks supporting Trump plowed through the main road in town, scaring Latinx people like Menchaca-Bagnulo’s sister, a hairdresser who already felt unsafe at work because it’s harder to social distance. When all that happened, things changed.

Now, it’s the economy and health care — two issues that go hand in hand in a pandemic — that top their priorities. That compromise from years ago no longer feels comfortable. For some, it no longer feels possible.

And it’s prompting a political awakening among the people who have felt some of the most acute shocks from the coronavirus: Latinas.

As a group, Latinas have experienced the bulk of job losses this year. The Latina unemployment rate hit 20.2 percent in April, leaving one in five Latinas out of work. From August to September, Latina unemployment rose month to month as it dropped for everybody else. It’s still in double digits at 11 percent.

Latinas are also the beating hearts of their families, the ones often tasked with caring for older loved ones who have gotten sick and for children who have been out of daycare or school for the majority of the year.

But for many years, Latinas in some parts of the country have been largely apolitical, a group with historically depressed voter turnout rates. Typically, Latinas go to the polls at 14 to 20 percent lower rates than non-Latinx Black or White women. Fear that they don’t understand the process, a language barrier or a belief that their vote doesn’t carry weight have acted as persistent barriers between Latinas and the polls.

“Latina women tend to think about what they need to do to preserve their family. In the past, it’s been hard to see how your vote is something that relates to your family,” or even to yourself, said Menchaca-Bagnulo, who is an assistant political science professor at Texas State University. This year it’s become “if I don’t vote, my family is in danger.”

And the economy is a major driving force behind that conclusion.

Nearly half of all Latina workers are employed in the three fields that suffered the largest job losses this year between February and May — hospitality, retail and “other services.” In hospitality alone, they make up almost 15 percent of the workforce, the largest of any group. Latinas also have significantly less access to paid sick leave and remote work. Nearly half of the frontline workforce at meatpacking facilities across the country — where coronavirus has infected thousands — are Latinx.

The fallout is all encompassing, said Jess Morales Rocketto, co-founder of She Se Puede, a nonprofit initiative launched this year with actors Eva Longoria Bastón and America Ferrera to help reach Latinas.

“In pursuit of changing that economic situation, they’re having to make real choices like ‘Can I afford to keep my phone on? If I don’t keep my phone on, how will I get work? Is it safe to leave my kids alone? It’s not safe, but what will I feed them if I don’t work?’” Morales Rocketto said. “These are economic choices, but it’s also about early childhood development and about consumer habits. This is affecting everything.”

A poll in three major states with large Latinx populations — Florida, Texas and Arizona — by UnidosUS, the nation’s largest Latinx nonprofit advocacy organization, found that the issues around job loss or pay cuts this year made over 60 percent of those polled more likely to vote in 2020.

This week brought that into sharper focus. The latest round of stimulus discussions in Congress seemed to completely dissolve on Tuesday, when Trump tweeted that he has instructed his “representatives to stop negotiating until after the election” when he says he will pass another stimulus bill if elected.

Then, two days later, negotiations were back on between House Speaker Nancy Pelosi and Treasury Secretary Steven Mnuchin, with Trump adding that another round of $1,200 stimulus checks were back on the table.

The political tennis match has workers worried, and it’ll be on people’s minds as they head to the polls, said Orson Aguilar, principal with UnidosUS.

“Latinas would have been disproportionately impacted by more relief,” Aguilar said, not just as workers but as business owners. Latinx people start about one in four new businesses in the United States, and Latinas own about 35 percent of them, according to a report by the Small Business Administration.

When hours started getting cut at the Fiesta Henderson Hotel and Casino outside Las Vegas and the coronavirus threatened to close the resort, Norma Flores was cautiously optimistic.

Flores, 54, lives with her 29-year-old daughter and six grandchildren, ages 3 to 13. And her wages were good with tips — most days she brought in $22 an hour.

She had worked there as a server for 20 years since immigrating from Mexico, and she thought her seniority as a server in the casino would save her from the worst of the cuts.

It didn’t. She was laid off in August.

Now, her daughter’s job at a deli counter at a small casino is all they have for her household of eight. Her daughter makes little more than minimum wage, so Flores has started cleaning houses once or twice a week to patch together enough to pay the light bill or get the kids something better to eat than cheese and bean burritos.

They survive on her daughter’s food stamps and, when they’re short, Flores will grab food from a local union. To get it, she sometimes has to walk in the Nevada heat — ever since her car broke down, she hasn’t had enough money to fix it. A molar in the back of her mouth has been aching for at least a month since a filling fell out, but without health insurance, that will have to wait too.

After two decades in this country, Flores said nothing has beat her down like this — and nothing has made her angrier.

“It has made me think a lot that it’s important to vote,” Flores said. “And especially women — we have to count.”

But Flores’ chance won’t come yet. Earlier this year, she was in the process of getting her citizenship, but COVID-19 derailed that. She wasn’t able to finish the process in time, she said. The timing couldn’t be worse.

Flores said that in prior years, elections never drew her. And there was the fear, instilled in her by an ex-husband, that she shouldn’t be involved in politics.

“The day the Latina values herself, that day she is going to be able to raise her voice,” Flores said.

Instead, she has turned to speaking about the election with her six children, who are citizens, and her family and friends, emphasizing the power of their vote.

“Everything you want,” she told them, “want it for me too.”

A record 32 million Latinx people are eligible to vote this year, making them the largest racial or ethnic minority in a presidential election for the first time.

But candidates have historically struggled to reach the Latinx community —  Latinas, in particular — and understand the nuances of country of origin, time in the United States and immigration status that may inform someone’s relationship with voting and politics.

Instead, the group has largely been treated as a monolith. There is little polling that captures how smaller groups, like Nicaraguan-Americans or Guatemalan-Americans, vote.

For example, the Republican message of “socialism” in the Democratic Party is particularly powerful with Cuban-American people and some Venezuelen-Americans, who intimately understand the pain unleashed by authoritarian governments. But it’s more powerful among older voters and men than younger people and women. And that’s just one group.

For other groups of Latinx voters, particularly Mexican-Americans and immigrants from Central America, the topic of immigration is more resonant.

As a group, the Latinx community leans more Democratic, but there is a strong gender gap between men and women. According to polling from Equis Research, a Democratic Latinx firm that has conducted nearly 30,000 interviews with Latinx voters in 11 states, there is a double digit gender gap in Trump’s approval rating between Latinas and Latinos in 10 of those states, with Latinas being far more critical of the president.

“This might be the very first election where [Latinx] participation is potentially large enough and influential enough to warrant this kind of granular conversation” about identity, said Morales Rocketto from She Se Puede. “This is where the cultural and political strategies really collide.”

Some of it is also debunking assumptions about what is most important to the Latinx community and understanding that the pandemic may have changed voter priorities, particularly with Latinas and the economy.

“You have women of all stripes who are saying, ‘Enough is enough. I won’t be silent. I won’t have people speak for me. I can speak for myself,’” said Morales Rocketto.

That’s how Marlene Mendoza has felt in the seven months since she was laid off from her restaurant server job at the Los Angeles International Airport. She watched her coworkers lose their livelihoods and their health insurance, while her employer, concessionaire HMSHost, got rent relief.

Mendoza, 53, got another job in the meantime, but 2020 has made her think more about the critical role frontline workers have played this year, many of them Latinas.

“We are people that they don’t even talk about,” she said — until they became essential.

Ahead of the election, Mendoza has been calling people in her community to drum up excitement for the election. She has lived in the United States for more than 30 years since immigrating from El Salvador, and she usually votes. But few elections have felt this important, she said.

She recently was on the phone with another woman, a Latina she didn’t know, who immediately asked Mendoza if she could get a lawn sign to support Democratic candidate Joe Biden.

“Are you coming now?” the woman asked her.

It was a signal to her that the women in her community are ready to publicly speak up — and that could be an influential force.

“For Latinas in particular to stand up?” Mendoza said. “We are the strength of our families.”