The markets are awash in frightening numbers and we’ve got another one to add to the heaping pile: Just 15 percent of board seats at the companies that have gone public this year are held by women. One of the companies that IPOed, California-based pharmaceuticals manufacturer Arcutis, did so with zero female directors, in violation of the state’s new law banning all-male boards.

While several headlines last week trumpeted the excellent news that 2019’s biggest IPOs saw a record increase in the share of women board directors, this year’s numbers — so far — seem to indicate that true momentum on that front has yet to get solid traction.

Last year, women held 21.9 percent of board seats in the top 25 largest IPOs and just one company, cannabis goods distributor Greenlane, made its public debut with no women directors, according to the nonprofit 2020 Women on Boards. That 21.9 percent number is up from a paltry five-year average of just 10 percent.

These numbers only tally the biggest IPOs so can’t be directly compared to this year’s stats — bigger companies typically have more accountability (though not always!) and therefore better gender representation — but things are surely heading in the wrong direction. And, based on market caps, it’s possible that Arcutis could very well be among this year’s bigger IPOs, and biotech firm PPD, which had just one female board member (making its average 11 percent — see chart below), will almost certainly make the list.

“If we’re not changing how we’re running our boards, nothing changes,” Sheryl O’Loughlin, the founder of theBoardlist — a database of qualified prospective female board directors — recently told the New York Times.

The bad news numbers for this year don’t stop with the 15 percent — there is only one female CEO among the 17 companies that have IPOed and just 20 percent of the executives named in the SEC filings are women. In total, there were six companies that went public with zero women on their boards and four that went public with just one female director. Annovis Bio, the sole company with a woman CEO, Maria Maccecchini, also had the highest percentage of female board members at 40 percent. (Note that our analysis only includes U.S.-based companies and does not include special purpose acquisition companies.)

There were 43 companies that were non-compliant with California’s Women on Boards law as of Dec. 31, 2019, according to a report published last week by the California Secretary of State. Arcutis is the only California-based company to IPO this year with no women on its board. Three other California-based companies have gone public thus far this year: Revolution Medicines, which has a board that is 25 percent female; 1Life/OneMedical, with a board that is 22 percent female; and Velocity Financial, with a board that is 17 percent female. There is a $100,000 fine for companies that do not comply with the state’s law; however, because of ongoing litigation over the statute, the penalty fees are not currently being collected.

In a statement previously given to Boss Betty, Arcutis CEO Frank Watanabe said that the company is “focused on recruiting qualified female executives and directors not only to comply with California’s laws regarding board diversity, but more importantly because our board and leadership team see a need for the biotechnology industry to better utilize the talents and potential of women in our industry.” BTW, the Arcutis IPO was underwritten by Goldman Sachs, which has pledged that starting this summer, it will not bring companies public unless they have at least one diverse board member, “with a focus on women,” per Goldman CEO David Solomon.

The European Union is revisiting a 2012 draft plan requiring that a minimum of 40 percent of non-executive board seats at European-listed companies be held by women. As in California, where women now account for 45 percent of new board seats at Russell 3000 companies headquartered in the state, advances towards boardroom gender parity have been made in France, Germany, Italy and Belgium thanks to mandatory minimums. Quotas are “a necessary evil, in the sense we have to use quotas because otherwise we will wait another 100 years for things to change by themselves,” said EU commissioner for equality, Helena Dalli.

Here are the numbers for this year’s IPOs: 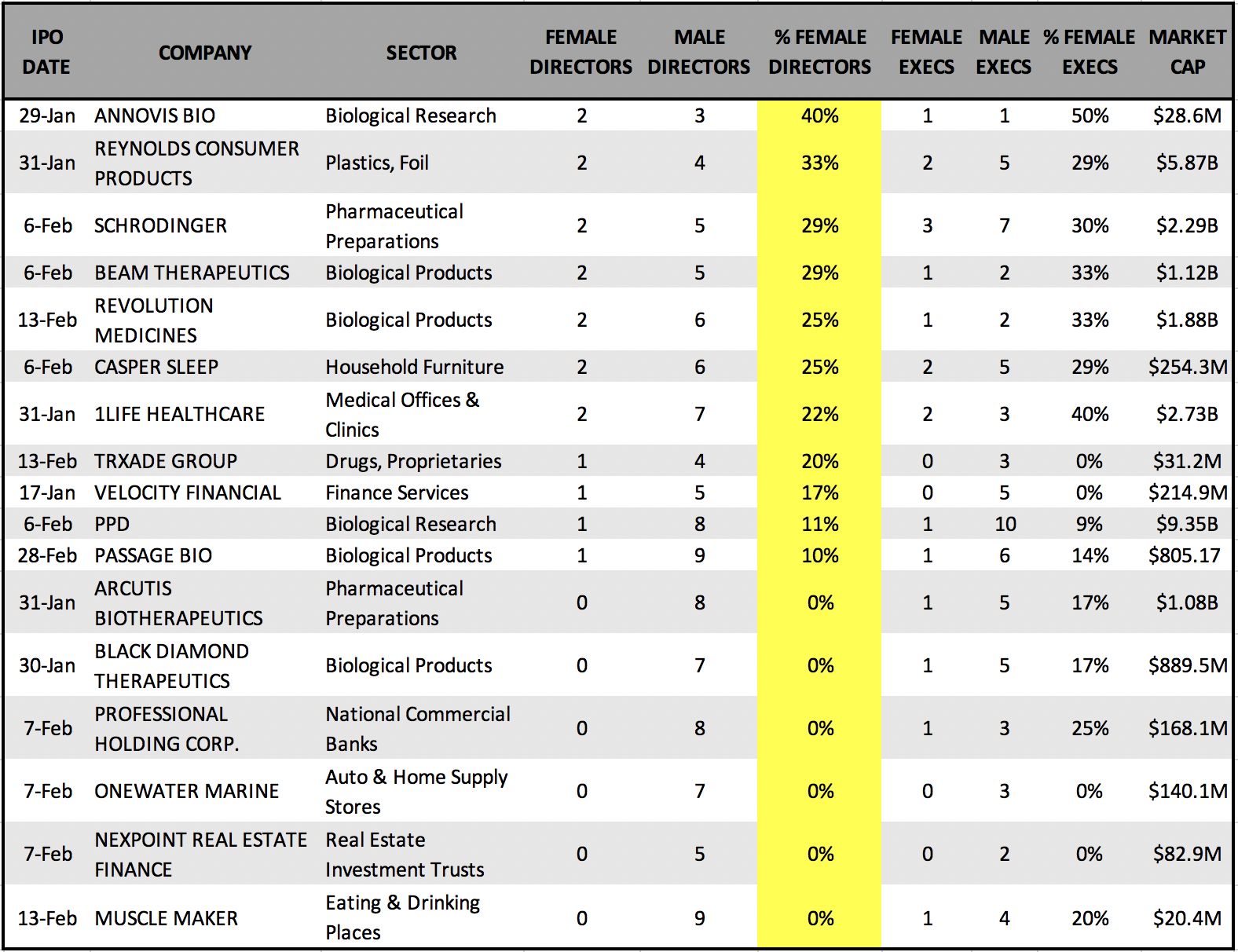 Analysis based on SEC S-1 filings of companies that went public on a major U.S. stock exchange in January and February of 2020. Only U.S.-based companies were included. Special purpose acquisition corporations were excluded.